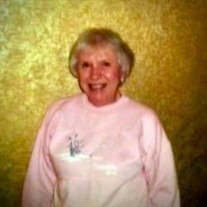 Virginia White Spini June 17, 1930 – April 7, 2022 It is with profound sadness that we announce the passing of our mother, Virginia White Spini. Virginia passed away peacefully in the home she loved, surrounded by the love of her family, on April 7, 2022. Virginia, the only child of the late Kathleen and Morrison White, was born on June 17, 1930 in Missoula Montana. After her father died when she was 3 years old, Kathleen moved with her daughter to Texas for a few years, and then back to California, eventually settling in San Francisco when Virginia was 11. Her mother never remarried, and supported herself and her daughter by working for the U.S. Postal Service. Virginia graduated from Washington High School, and San Francisco State University, where she majored in business and music, while working part-time as an executive secretary for Macy’s. It was while attending college that she met her future husband, and love, Henry Spini. After graduating from San Francisco State, the two were married in 1953, and settled in San Francisco for a few years, while Virginia worked in the Accounting Division of PG&E. Anticipating starting a family, they moved to San Carlos where they built their home. It was in this home, that Virginia remained for 67 years, until her passing. Henry and Virginia enjoyed traveling the world together, and their home proudly displays treasures from all their adventures. Virginia also traveled to China and Africa with friends, and enjoyed embracing the cultures and beliefs. Henry and Virginia loved entertaining their many friends and family in their home, where many holiday feasts were prepared with love. Virginia possessed an extremely positive and outgoing disposition, which she attributed from her family upbringing, being raised by a hard-working widowed mother during the Great Depression. When asked what her greatest accomplishments were, besides her three beautiful children, she would proudly state “Climbing Half Dome in Yosemite National Park”, which she did while in college. She was also proud of learning to drive a stick-shift car, which Henry taught her while they were on their honeymoon, being a Lifeguard, and teaching children to swim. Virginia was very active with all three of her children’s school activities, PTA, Girl Scouts, Boy Scouts, Jobs Daughters, Little League, Babe Ruth Baseball, and with her daughter’s piano and choir concerts. She was also an award-winning volunteer and member of several Civic organizations, including American Association of University Women (AAUW), and Junior Matrons, where she served as President from 1991-1992, and on the Board as Chairman for many positions throughout the years. She also proudly served for over 20 years as a volunteer at Sequoia Hospital, in various positions, from counsel to families in the ICU, to working in their Gift Shop. She was later recognized by Sequoia Hospital for her many years of dedicated service. In her later years, she loved volunteering for The Family Tree shop in San Carlos, until glaucoma forced her to retire. Virginia is pre-deceased by her husband, and love of 60 years, Henry, her parents, Kathleen and Morrison White, her aunt, Mary Harmon, and her cousin Elizabeth Zimmerman. She is survived by her children, Laureen, Mark (Karen), and David (Angie), grandchildren, Emma, Brad, Brian, Jenna, and great-granddaughter, Savannah. She is also survived by her nephew Richard (Donna) Besone, great-niece, Teresa (Walter) Ruzzo, great-nephew Chris (Terri) Migleo, great-great-niece, April (Mike) Blanchard, great-great-nephew Jonathan Migleo, and second cousins, Edward (Kim) Zimmerman, Fred (Michele) Zimmerman, John Zimmerman, and Betsy (David) Zimmerman Villalpando. Virginia was blessed to have been surrounded by an extraordinary group of neighbors, who deeply cared for her. In particular, Marv, Linda, and their dog Willow. Mom enjoyed many gourmet meals at their home over the years, and Linda and Willow would visit Virginia daily, with Willow keeping vigil at Virginia’s bedside in her final days. Virginia’s family would like to extend their sincere thanks to her caregivers, Lina and Freda, who cared for Virginia with great love, compassion, and dignity, which allowed her to remain in the home she loved in her final months. Services for Virginia will be held Thursday, May 12, 2022, 11:00 a.m. at Skylawn Memorial Park, Highway 92 and Skyline Boulevard, San Mateo, CA 94062. Interment will be private.

Virginia White Spini June 17, 1930 &#8211; April 7, 2022 It is with profound sadness that we announce the passing of our mother, Virginia White Spini. Virginia passed away peacefully in the home she loved, surrounded by the love of her... View Obituary & Service Information

The family of Virginia White Spini created this Life Tributes page to make it easy to share your memories.

Send flowers to the Spini family.