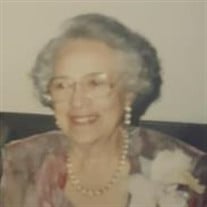 Verlie Mae Pickens was born on June 11, 1916, in Lake Charles, Louisiana to the union of Thomas Alfred Nisby and Lillian Lumpkin Nisby. Verlie was the fourth child of eight children. The entire family sat for dinner nightly and their father would not bless the table until everyone was seated. As a young child, she was very active, participating in class plays, singing and dancing. Verlie also played piano, tennis, volleyball and even played touch football with her big brothers Charlie and Wiley. She graduated from Sacred Heart High School in 1936. In 1937, Verlie married her first husband Joseph Henry Anderson. To that union, she was blessed with her only child Joseph Henry Anderson II, born March 23, 1937. In 1940, she followed her two brothers and migrated from Louisiana to San Francisco during the great depression. In 1941, Verlie moved to Los Angeles and worked at Lockheed for a few years supporting the war effort as a Rosie the Riveter, located in a factory on 7th & Santa Fe Streets (downtown Los Angeles). She loved to tell the stories of working on the boon of the Mustang P-38, doing the riveting on the tail end of the plane. That career was cut short due to health concerns after her exposure to metal and developing metal lead poisoning. In 1945 Verlie returned to San Francisco and started a new career as a Confectioner at the famous Blum’s and Langendorf bakeries until her retirement. Verlie mastered the recipes for cakes, pies and candy, which she continued to make for the rest of her life. Not being a person of idleness, she continued to bake until the very end of life, making pies and cakes from scratch at 105 years young. At the end of WWII, Samuel Van Buren Pickens came back to Lake Charles looking for his childhood crush. When he was told that Verlie had moved to California, he packed up and immediately went to find her. In 1947, Verlie and Samuel were happily married for 40 years, until his passing in 1987. Verlie and Samuel traveled in their motorhome throughout the United States. They visited every state except Rhode Island. Verlie’s love for life and travel took her many other places as well including London, Paris, Rome, Egypt, Hawaii, Mexico and Canada, just to name a few. Verlie also loved to garden, growing her own vegetables and some fruits and flowers. She would awaken early before sunrise to tend to her beautiful backyard. Verlie was dedicated to Christ from birth, growing up in the church, playing and singing for the choir in Lake Charles. She was a dedicated and faithful member of Jones United Methodist Church for over 60 years. She was active in several ministries including the choir, usher board, mother’s board and helped with special events. Verlie also spent time in a traveling singing choir. Verlie was a well-known community figure for her passion for helping others in her neighborhood and community. She volunteered at the Senior Action Network, Bayview Hunters Point Senior Adult Day Health Center, Network for Elders, the Dr. George W. Davis Senior Center (Davis Senior Center) and other community places in Bayview and Hunters Point. She received many accolades, awards and commendations from several mayors of San Francisco. Supervisors, the governor and legislators for her dedication and advocacy for the senior population of Bay View-Hunters Point. Using her culinary gifts, she enjoyed preparing peach cobblers, butter pound cakes and cheesecakes for the annual Black Cuisine feasts at the Davis Senior Center. Verlie continued to remain mentally active in her golden years, reading a new book every week with no glasses. She celebrated 105 years of life and her last birthday at downtown Disneyland surrounded by family and friends and a new hat! Verlie put on her heavenly wings and peacefully passed away on September 22, 2021. Verlie was preceded in death by her husband Samuel Pickens, her son Joseph Henry Anderson and six siblings (Addie B. Hall, Charles Nisby, Wiley Nisby, Tommie Dewitt, Lillian Nisby, Mercedes Joubert). She leaves to cherish her memory, a surviving sister Vera Miyasaki, granddaughter Charisse Anderson, grandson Joseph Anderson, great grandson Jeremy Anderson, daughter in love Euna Anderson and a host of nephews, nieces, other relatives and friends. Verlie’s life philosophy: “Try to live a decent life. Love God. Live life fully. Respect nature. Be kind to one another. Treat everyone with kindness and respect. Eat the right foods. Keep active. Get your exercise and lots of fresh air. Take good care of your health.”

Verlie Mae Pickens was born on June 11, 1916, in Lake Charles, Louisiana to the union of Thomas Alfred Nisby and Lillian Lumpkin Nisby. Verlie was the fourth child of eight children. The entire family sat for dinner nightly and their father... View Obituary & Service Information

The family of Verlie Mae Pickens created this Life Tributes page to make it easy to share your memories.

Send flowers to the Pickens family.