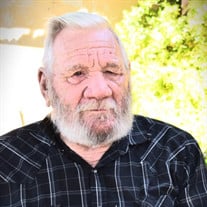 Tommy Mack James, 83, was born in Blanchard, Oklahoma on December 30, 1938. He passed peacefully at his home on Jan 17, 2022 at 245 pm, after a long battle from a cerebrovascular accident. Tommy was born in Blanchard, Oklahoma to Jesse Franklin James and Hazel (Née: Perry) James. He Graduated from Sequoia High School, in Redwood City, California, on June 15, 1956. Tommy served in the United States Marine Corps, and was honorably discharged in January of 1965, with a rank of private first class. He retired from Ford Motor Company in 1982. Tommy Married Barbara Seeds on May 23, 1964. TJ loved the outdoors, he spent most of his days shooting, racing motorcycles, hunting and exploring the west. He was a well respected and excellent metal finisher, mechanic, and gunsmith. He could fix anything. Tom never backed down from a challenge. Tom didn’t say much, He was wise with his words. Two of his greatest loves were his property in Modoc County and working on his log cabin. He also loved giving all the grandkids tractor rides. Tommy is Survived by his wife Barbara (Née: Seeds), His son Lee, Four Grandchildren: Jessie, Jeffrey, Cody, Tracy, and Six-great grandchildren. Services are Friday February 4, 2022. The viewing begins at 12pm noon, and burial to follow at 2:30pm.

The family of Tommy Mack James created this Life Tributes page to make it easy to share your memories.

Tommy Mack James, 83, was born in Blanchard, Oklahoma on December...

Send flowers to the James family.