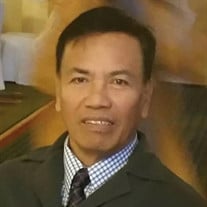 Salvador “Badong” Aquino, was called home to be with the Lord on July 6, 2021 while surrounded by his loved ones. “Well done thy good and faithful servant! …enter thou into the joy of the Lord!”- Matthew 25:21. His life was a true living testament of God’s love for him and a reflection of his devout love for God. Philippians 1:21 “For to me, to live is Christ and to die is gain.” Salvador was born on July 5, 1946 in the province of Mangaldan, Pangasinan Philippines. Orphaned at the age of two, Salvador learned to support himself starting at a very young age, selling “Chicklet Gum” and “Cigarillo” (cigarettes) on the streets. Also known as “Buds,” he trained in the Manila street boxing rings and had a jump shot in basketball like no other. It’s no surprise why he had such a special love for watching Manny Paquaio fights and the Golden State Warriors basketball team. Despite being raised in an impoverished neighborhood he was determined to do well in school and make something of himself. Salvador went on to complete his professional degree as a civil engineer where he would eventually manage, procure, design and construct major infrastructures successfully throughout the Philippines. At that time God’s plan for him began to unveil. In 1960, he was reached by an American missionary and began to attend Sampaloc Baptist Church in Manila. It was there where he began to teach Sunday School and would meet his future and loving wife of 45 years, Luzviminda Carranza. Married in 1975, they moved from the island of Guam, to San Francisco, California to continue his career at Bechtel Power Corporation where he would specialize in nuclear power engineering, raise his family, start his own Construction Company and then eventually retire in 2008. Blessed with 4 children, Rueben (son), Maye (daughter), Sallie (daughter) and Luzelle (daughter), Maria (wife of Rueben), Dave (husband of Maye), Larry (husband of Sallie), James (husband of Luzelle). With 7 grandchildren, Carlo, JJ, Leah, Micah, (Baby) James, Kassandra and Maximus. He was known as “Lolo” and his special “La-La-La” song will forever be remembered as his lullaby that would successfully cradle and rock babies to sleep. All who loved him dearly will never forget his distinctive laugh, joyful smile, easy-going personality, generous spirit, and compassion for others. Salvador will live in our hearts forever and his legacy will carry on through the many lives he has influenced and touched. Family and friends are invited to share their memories of Salvador with his family during visitation at Skylawn Funeral Home and Memorial Park on Wednesday July 28, 2021 between the hours of 10:00am-2:00pm. A funeral service will also be held on Thursday, July 29, 2021 at 11:30pm- 2:00pm, followed by a lunch reception at Skylawn Funeral Home and Memorial Park Highway 92 at, CA-35, San Mateo, CA 94402. Memorial contributions can be sent to: The Aquino Family 2679 Cherry Blossom Way Union City, CA 94587

The family of Salvador G. Aquino created this Life Tributes page to make it easy to share your memories.

Salvador “Badong” Aquino, was called home to be with the Lord...

Send flowers to the Aquino family.