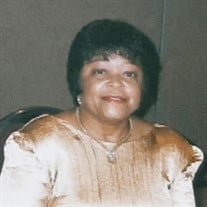 Life of Rose Zetta Smith Hamilton February 28, 1936 - November 16, 2020 Rose Zetta Smith was born February 28, 1936, in Barnum, Texas. She was the first of nine children born to the union of William Isaiah and Lillie Mae Brooks Smith. The family relocated to Beaumont, Texas in 1940. Rose attended Adams Elementary School as a high achiever and went on the Charlton Pollard High School (CPHS), where she graduated at the top of her class, with honors in May 1954. At CPHS, Best Sportmanship Award (basketball/softball), Rice Shock Queen (yearbook), class secretary, cheerleader. Rose accepted Christ at the age of 12, while attending Hollywood Baptist and was baptized by the late Rev. Hugh Harrell, in 1948. Later that year, she joined her parents and became a member of the Sunlight Baptist Church, under the late Pastor George W. Daniels. Sunlight Baptist Church provided the building blocks and foundation for her Christian journey, where she worked in all departments of the church children/youth, Sunday School, BTU, junior/youth choirs and later served as the Pastor’s secretary. Because of her high academic standing in high school, Rose received many scholarships to attend various colleges in Texas. However, after high school, Rose chose to relocated to San Francisco, California, to live with her aunts and grandmother and to attend college in San Francisco. She immediately united with the Macedonia Baptist Church, under the late Rev. P.H. Osbourn, She sang in the Young Adult Choir and worked with the Young Peoples Department. Rose was very busy in the Mt Zion District Association, California State Conventions, and the National Baptist Conventions. On June 3, 1955, she married Vernon D. Hamilton, in holy matrimony. To that union, two children were born. In 1956, a son Ronald Eugene and in 1966, a daughter Michele Yvette. Michele married Derold R. Arnick. They were also blessed with two adoring grandchildren, Ryan Rojay Arnick and Laila Yvette Arnick. In 1956, she moved her membership to the First Friendship Institutional Baptist Church, under the late Pastor E.L. Evans, to work at the side of her husband. Together, they have labored in the vineyard 60+ years. From 1956 until her health failed her, Rose held positions and was a member of the following: Sunday School Teacher, BTU Teacher, Junior and Senior Mission President, Choirs, 50th Anniversary Chair, 52nd Anniversary Chair, to name a few. She was passionate about helping children to achieve. academically as well as to learn about being a Christian. Rose received her Associate of Arts Degree from Skyline College in San Bruno, California and she earned her Bachelor of Science Degree in Business Administration from the University of San Francisco, Cum Laude. In June 2006, Vernon & Rose celebrated their 50th Golden Wedding Anniversary, in a gala celebration with 200 guests. Afterwards, they sailed to the exotic Caribbean with 50 family and friends. Rose was employed more than 36 years and retired in 1994 from the U.S. Department of Housing and Urban Development (HUD), as Regional Single Family Development Representative, where she was responsible for California, Nevada, Arizona, and Hawaii. Before she retired, she started her own business - Hamilton Tours and Travel. She was an international traveler. Her childhood fantasy was to travel and see the world. She even made it to Egypt and the Holy Land, and was baptized in the River of Jordan. Rose was always the party planner. She planned parties as a child at home for her siblings and as she grew up she planned parties and weddings for her family and friends. Rose loved flowers. She was the decorator for social events and at church for all occasions (Easter lilies, palms, poinsettas, etc.) and she left her gorgeous bow trademark on each one. She enjoyed doing fancy gift wrappings too. One thing you can say about Rose is she did what she set her mind to. And you could count on it being elaborate. She was an artist. Rose was a long time member of the Beta Pi Sigma Sorority, Delta Chapter. She was the National President, Supreme Basileus, National Ritual Director and Treasurer. In her Chapter, she served as Basileus at least 7 terms and she was the Lead Trainer for Project Lead. Rose and Vernon joined the Consorts social club in 1957. The group was very family oriented and they did a lot of things together. They learned how to ski and introduced many of their family members to skiing as well. The group held annual Christmas parties and later they became a non=profit and began providing scholarships to deserving students. Through the years, Rose served as President, Vice President, Treasurer. Preceding her in death were her parents, William Isaiah and Lillie Mae Smith, and two brothers - Joel Daniel Smith and Artis Lee Smith, sister Annie Lee Shellbourne, and her husband of 65 years, Vernon Dean Hamilton. She leaves to cherish her memories one son, Ronald Hamilton of Pacifica, Ca; one daughter Michele Arnick (Derold) of Stockton, Ca; one grandson, Ryan Arnick; one granddaughter, Laila Arnick; one great-grandson, Jiovanni Arnick; one goddaughter, Nicole Alana Smith of Dallas, Tx; two brothers, John (Rosie) Smith of Richmond, Ca, Carl (Erma) Smith of Pflugerville, Tx; three sisters, Louise Smith Jones of Vallejo, Ca, Lillie Smith Eaglin of Houston, Tx, Vivian Smith Robinson of Fairfield, Ca; two sister-in-laws, Carolyn Smith of Hayward, Ca, Carol Smith of Vallejo,Ca; the First Friendship Baptist Church Family, Local and International Travel Organizations Beta Pi Sigma Sorority, and the Consorts Club families, Sisters Network, as well as a host of loving nephews, nieces, cousins, other relatives and friends whose lives she touched. To ensure the health and safety of our community, we are following all guidelines set by local, state and CDC officials. If you are planning on attending a service, please contact the funeral home in advance, so that we can plan accordingly.

The family of Rose Zetta Hamilton created this Life Tributes page to make it easy to share your memories.

Send flowers to the Hamilton family.