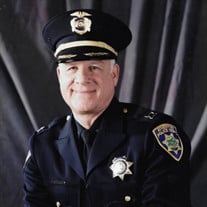 Ronald A. Harris, 62-year resident of Redwood City, CA, passed away on December 12, 2021, at the age of 85. Ronald (Ron) is survived by his wife, Mary Jo Harris, siblings Joel Harris and Linda Rodenspiel, brother-in-law Michael Fry, sister-in-law Charlene Harris, his son Scott Harris, his grandchildren Maxwell Harris, Devin Harris, and Luke Reed, as well as numerous nieces and nephews. He is predeceased by his brothers Leland Harris (as an infant) and Gary Harris, sister Loretta Sevy, daughter Pamela Harris Reed and brother-in-law Donald Fry. Ron was born on October 27, 1936, in San Francisco, CA to Irving (Pat) and Rita Harris and was raised in Daly City, CA. He graduated from Jefferson High School in Daly City in 1954, where he was a track and field star, and shortly thereafter began working for the family auto-body repair business for 10 years, and concurrently enlisted in the National Guard for four years, before finally embarking on his 31-year career in law enforcement. Ron was attracted to the dynamic nature of police work and the opportunity to serve others, especially youth. He joined the Atherton, CA Police Department in 1967 after serving 3 years as a reserve officer there. Ron devoted his early law enforcement career as head of the Juvenile Division and served as the official School Liaison Officer. He was well known and popular among students from the Atherton elementary schools through the middle schools and finally to Menlo Atherton High School. In 1974 Ron received his AA Degree in Law Enforcement from Canada College in Redwood City, CA. Ron was the recipient of many awards during his tenure with the Atherton Police Department, including Policeman of the Year (1969, 1995), the David M. Silva Award for outstanding work in the field of juvenile safety (1970), the Honorary Service Award from the California Congress of Parents and Teachers, Inc. (1972, 1973), and Police Officer of the Year by the Redwood City and Belmont/San Carlos Exchange Clubs (twice in the 1970s). In 1984, then Lieutenant Harris was selected to attend the 139th session of the FBI National Academy in Quantico, VA. Ron rose through the ranks of the Atherton Police Department, being promoted several times from Patrolman to Inspector, Sergeant, Lieutenant, Commander and finally Captain. He retired in 1995 at the rank of Captain, reporting directly to the Chief of Police, and being responsible for managing all aspects of the Atherton Police Department operations. Ron was also a very accomplished musician, playing the accordion since he was 4 years old in 1941. He took lessons for over 10 years, well into his late teens. His typical dedication to achieving excellence in the things he did were exemplified when he won the Horace Heidt Radio / TV contest (The Original Youth Opportunity Program), which was the first national traveling talent show in the United States. Other notable discoveries from this contest include Johnny Carson and Florence Henderson. Ron was a member of several accordion clubs and performance ensembles, performing locally and regionally throughout California, Nevada, and Washington State. He was also frequently asked to perform as a soloist for special functions, such as holiday group bus and train excursions. In his constant pursuit of serving others, Ron also performed at senior citizen residence facilities, playing the oldies for the residents. Ron and wife, Mary Jo, shared a love of horses, which they cultivated in the 1980s after their children were grown. They joined the San Mateo County Horsemen's Association (SMCHA) in 1985. By 1988 Ron was elected President. He remained on the Board of Directors for many years. Ron continued to devote his free time to offer his impressive leadership skills to several other equestrian organizations where he served as Chairman of multiple committees for many years. He was eventually inducted into the Mounted Patrol of San Mateo County Hall of Fame. Ron and wife, Mary Jo, were also founding members of the San Mateo County Parks Volunteer Horse Patrol. To all that knew him, Ron was quite remarkable. He had many talents and excelled at all of them, yet his demeanor exuded a soft-spoken humility. For all those whose lives he touched, he displayed boundless energy and motivation in his unending desire to help others, learn new things, perfect his natural talents, or hone the skills he acquired through his love of learning new things. There are many complimentary words that accurately describe Ron, but these three can encompass them all: Integrity, Kindness, Persistence. With these tools Ron became a veritable Swiss Army Knife of talent and skills, all wrapped around a good-natured man with a personality brimming with the sincere desire to do the right thing and never give up or compromise while trying to achieve it. A funeral service was held on December 30, 2021, at Skylawn Memorial Park in San Mateo, CA, where Ronald is interred. In lieu of flowers the family suggests donations to the Redwood City Veterans Memorial Senior Center at 1455 Madison Ave Redwood City, CA 94061.

The family of Ronald Allen Harris created this Life Tributes page to make it easy to share your memories.

Send flowers to the Harris family.