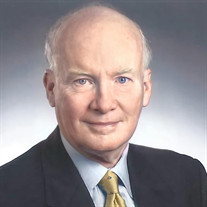 Robert A. Theleen, a former officer of the United States Army and a long-time investment banker specializing in China, died August 9 at his home in Lake Tahoe. He was 75 years old. Mr. Theleen, who served in the Army in Vietnam and then spent much of his banking career in Singapore, Hong Kong, and China, was a leading figure among the American bankers who flocked to Asia to help finance the development of the continent in the years after the Vietnam war. He played a significant role in opening China to the West. A raconteur, Mr. Theleen was born to Bert and Dola Theleen in Chicago, Illinois. He was particularly close to his older brother, Donald, who died in 2016. His education began at St. Willbrord’s School, followed by Mendel Catholic Preparatory High School and Duquesne University, while finally graduating with a bachelor’s degree from Johns Hopkins University in 1966. Upon graduation, Mr. Theleen was drafted and commissioned as an officer in the intelligence branch. Called to duty during the most intense battles of the Vietnam War — a span that included the Tet Offensive of 1968 — he was wounded and received a Purple Heart. He attended the Army Intelligence School and Central Intelligence Agency Case Officer School. After his service, he went on to receive a master’s degree from the American School of International Management (Thunderbird) in 1970. He then moved to Texas, where he became vice president of the First National Bank in Dallas. He later was asked to move to Singapore to lead the bank’s branch there. While living in Singapore, Mr. Theleen found the love of his life, Jenny Hsui. In 1977, he moved to Hong Kong to start a merchant bank for First National Bank in Dallas. It made term loans, financed trade, and provided foreign exchange services to multinational and local companies. Jenny moved to Hong Kong, where they were married in 1978. In 1979, Mr. Theleen left the First National Bank in Dallas to start ChinaVest with his wife. This began their lifelong work together, founding and building ChinaVest from the ground-up. ChinaVest arranged project financing and acted as the general partner for a series of venture capital funds with a focus on “Greater China,” a term coined by Mr. Theleen himself. Mr. Theleen is regarded to be the first Venture Capitalist in China, cementing ChinaVest itself as the oldest independent venture capital firm in China. Gaining perspective of the new frontier of China at the time, ChinaVest became one of the top venture capital firms in North Asia. He moved ChinaVest to San Francisco during the beginnings of the dot-com era. Mr. Theleen eventually transformed their business into ChinaVest Merchant Bank, headquartered in Shanghai, which would provide advisory services to John Deere, Heinz, Wells Fargo, Rockwell Limited, Tencent, and other major international companies. Mr. Theleen was a frequent guest analyst on Bloomberg, CNBC, and other news shows seeking his comments on Chinese business, politics, and economic policy. In 2001, Mr. Theleen was awarded an Honorary Doctorate by Loras College, where he gave the commencement speech. Mr. Theleen was elected as Chairman of the American Chamber of Commerce and served for three consecutive terms, one term more than the norm and advised his successors. Mr. Theleen served on several not-for-profit Boards: notably the Asia Foundation, Nanjing University-Johns Hopkins, among other institutions, the U.S., China, and Hong Kong. He chaired the Presidents’ Round Table in Shanghai. Its members include more than 60 chief executives for China and Asia for major foreign multinational corporations both American and European, operating in China. Mr. Theleen also became one of the first foreigners to become a main Board Director of a publicly listed Chinese State-Owned Enterprise, Beijing Enterprises. His restructuring of its gas assets still stands today as one of China’s national achievements. In 2004, Mr. Theleen was the only foreigner invited by the Chinese government to serve as a senior member of a Chinese law-making task force, on which he served for five years, restructuring a major portion of the Chinese financial industry under the auspices of the NDRC. In 2016 the Shanghai Government wrote a book on the 10 most influential Americans in Shanghai, of which he was one. He has served on advisory committees for the United States and Chinese government policies in trade and investment. Known as Bob to his close friends and family, Mr. Theleen will be remembered not only for his academic and business success but also for his love of the game of golf, his love of debate, and his devotion to the well-being of his family and friends. Most of all, he will be known for the compelling and captivating stories he told. Mr. Theleen is survived by his wife and business partner of 42 years along with their daughter Kristina.

Robert A. Theleen, a former officer of the United States Army and a long-time investment banker specializing in China, died August 9 at his home in Lake Tahoe. He was 75 years old. Mr. Theleen, who served in the Army in Vietnam and then spent... View Obituary & Service Information

The family of Robert A. Theleen created this Life Tributes page to make it easy to share your memories.

Robert A. Theleen, a former officer of the United States Army...

Send flowers to the Theleen family.