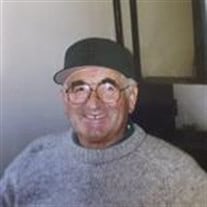 Raymond Burton Dawley passed away peacefully in his home on May 25th, 2021. Ray loved life and lived his 93 years to the fullest, blessing those he knew with kindness, generosity, and honesty. Prior to his passing, his home was kept filled with family and loved ones who came from all over to reminisce about the memories and love Ray brought into their lives. An only child to Leonard and Grace (Leona), Ray was born and raised in San Francisco, California, which served as a constant source of childhood stories for him to share - one especially noteworthy tale was how he was just a young boy when the Golden Gate Bridge was originally built; he and his parents being some of the firsts who crossed it by foot. He graduated from Balboa High School in 1945 and later served in the United States Navy on the Aircraft Carrier USS Boxer at the end of World War II. Shortly thereafter, he settled down in Redwood City, becoming the proud owner of Ray’s Shell Station which bore his name for over 40 years. Through his commitment to the station, he became an admirable and well-known member of the community, one in which he and his wife, Mona eventually raised their family. Ray loved his fellow man and was always extending his hand when needed or making himself available to sit and share stories. Ray loved his family, The Giants, and the sea. He was active in the Sequoia Yacht Club; he spent hours sailing his beloved “Simba” in the South Bay and fishing for salmon off of his Monterey fishing boat, “The African Queen”. Ray thrived off being a member of the community and became a proud sponsor of Ray’s Shell Little League for decades in Redwood City. As he would say, “for the love of the game.” Although Ray’s wife Mona Dawley (Taylor) preceded him in death after 42 years of marriage, they are survived by their four children: Linda Moore, Dianne Ludvigson, Carol Dawley-West, and Raymond Dawley Jr. Ray found love again later in life upon meeting Genevieve. Together, they spent a majority of their retired years travelling the world and married in 2001. Between their blended families, Ray’s memory is not only carried on by his children, grandchildren and great-grandchildren, but also by a large extended family who loved him deeply and shared many years of his life. Ray will be dearly missed by an extensive network of family, friends, and those lucky enough to cross paths with him, whether it was a swim in his pool or a birthday dinner on his deck. Neighbors, friends and family will remember his warm welcomes and goodbyes; his knack for telling jokes, his love of margaritas and red wine, his tales of world travels and as a part time cowboy. He truly was a “Ray” of sunshine. Services are scheduled at Skylawn Funeral Home and Memorial Park in San Mateo on July 22nd, 2021 - to celebrate the life of Raymond on what would have been his 94th birthday.

Raymond Burton Dawley passed away peacefully in his home on May 25th, 2021. Ray loved life and lived his 93 years to the fullest, blessing those he knew with kindness, generosity, and honesty. Prior to his passing, his home was kept filled... View Obituary & Service Information

The family of Raymond Dawley created this Life Tributes page to make it easy to share your memories.

Raymond Burton Dawley passed away peacefully in his home on May...

Send flowers to the Dawley family.