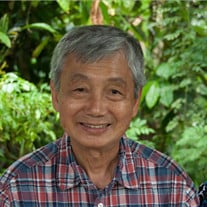 Peter Hong Tsai, beloved husband of Linda, father of Larry and Karen, father-in-law of Ivy and Jon, grandfather of Kayla, Zadie, Alyssa and Roxie, brother to his siblings Trinh, Wendy, David and Jack, and kind-hearted and loyal friend to many, passed away peacefully on Friday, September 18, 2020. Peter lived a full and rewarding life. He was born in Saigon, Vietnam in 1945 and grew up there with his parents and siblings with a humble beginning. Peter was the eldest of five and helped shoulder the responsibility of providing and caring for his family. He was an especially filial son who loved his parents very much and worked hard to make a better living for everyone at home. After high school, he worked as a teacher at an elementary school where he met a fellow teacher, Linda. They dated for a year, married in 1973 and then had their first child and son, Larry, a few years later. Peter cared deeply about his family and to ensure a better life and future, he made the courageous decision to leave everything behind in 1978 and escape as boat refugees, first arriving in Malaysia at a refugee camp, and then later settling in San Francisco with the help of a Buddhist sponsor. Upon arriving in the U.S., he was helped by his good friends, the Tseng family, who had immigrated earlier. Peter worked hard and studied at a technical college to become a trained technician. He, his wife Linda, and his son Larry first lived in San Francisco before eventually settling in the South Bay. He and Linda later had a daughter, Karen. Peter worked in the semiconductor industry for many years, helping to maintain fabrication equipment at semiconductor companies. He later decided to become a business owner and joined his wife in running a successful convenience store for 17 years. During this time, he built and enabled a comfortable and happy life for his family including purchasing a home in Santa Clara, going on family vacations, putting both of his children through university and saving for his retirement. He was diagnosed with Stage 4 kidney cancer in 2009 and then decided to retire to enjoy his time with his wife, children and grandchildren. After this diagnosis, he beat all odds and bravely survived multiple metastases, surgeries, and other treatments. He felt lucky to have a high quality of life and to be able to enjoy swimming, exercise, travel, socializing with friends, and most of all, taking pleasure in spending time with family. This September, during his latest round of chemotherapy and surgeries, his cancer and the complications worsened his condition. He passed peacefully with his family by his side in the evening on September 18, 2020. Peter led a full life and he will always be remembered for the smiles he brought to people and the memories he helped share. He will be missed by all who had the good fortune to know him, love him, and be loved by him. May he now rest in peace. A service will be held on Monday, September 28 at 10:00 AM at Skylawn Memorial Park. If you have a fond memory of Peter, we welcome you to share it on this page. To ensure the health and safety of our community, we are following all guidelines set by local, state and CDC officials.

Peter Hong Tsai, beloved husband of Linda, father of Larry and Karen, father-in-law of Ivy and Jon, grandfather of Kayla, Zadie, Alyssa and Roxie, brother to his siblings Trinh, Wendy, David and Jack, and kind-hearted and loyal friend to many,... View Obituary & Service Information

The family of Peter Tsai created this Life Tributes page to make it easy to share your memories.

Send flowers to the Tsai family.