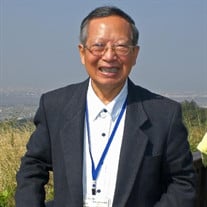 Pen-chu “Ben” Chou 周本初 was born in Jiangxi, China January 2, 1936, and passed away in his sleep on May 17, 2021, at his home in South San Francisco after a decade long battle with Parkinson’s disease. Ben was preceded in death by his father Shi Mian Chou (Zhou) 周士冕 and his mother Xiang Lan Kao (Gao) 高香蘭. He is survived by his wife Chun-chu “June” Chou 蔡 俊 珠, his son Scott Chou 周守愚, his younger sisters Tsui-Ying Chou 周翠鶯 and Li-Ying Chou 周麗鶯, and his two grandchildren Stanley 周邃哲 and Sabrina Chou 周月來. Ben suffered a childhood disrupted by a revolutionary war in China that ultimately took the life of his father. Near the end of war in 1949 at the age of 13, his mother took him and his two younger sisters to Taiwan as war refugees. The family lost their privileged lives in mainland China and began a new one where his mother did odd jobs to support the family on her own. Ben attended Taiwan’s Naval Academy for 4 years following high school. Afterwards, he went on to obtain a degree in chemistry at Tunghai University. In his 2nd year at Tunghai, he was hospitalized for 3 weeks during which he met a young nursing student named June Tsai. Ben and June fell in love and were married in early 1963 and have stayed married to each other ever since. Their only child Scott was born in 1964. 1964 is also when Ben answered America’s call for scientists around the world to come join the space race. He started with a master’s degree in chemistry from the University of Missouri at Rolla and eventually got his doctorate in electrical engineering from the University of Oklahoma. His professional life was spent mainly at the University of Houston and Jilin University in Changchun, China. In this career, he became known as Professor Chou (Zhou Laoshi) to his community as well as many generations of graduate students. At both schools, he taught and conducted research in High Temperature Superconductivity. His scholarly accomplishments were well-chronicled in numerous publications dating back to the Journal of Applied Physics in 1967. His most notable research contributions were in the area of photo-reactivity for thin film superconductors during the 1990s and 2000s. Other tributes to Professor Chou include an award given to the top doctoral dissertation in Information Science and Technology each year at the California Institute of Technology. Professor Chou’s life away from the office was dominated by a lifetime of commitment to social causes and a passion for Chinese calligraphy. As a product of the 1960s, he joined numerous student movements to fight injustices wherever he found them. He was particularly proud of his involvement with the Diao Yu Tai Student Movement in the early 1970s which resulted in his name being memorialized on the pages of the New York Times in 1971 as well as the library at Tsinghua University where in 2007 he donated the largest known collection of historical materials covering the movement. In the 1990s, he started spending much of his free time supporting the Overseas Chinese Education Foundation (www.ocef.org) which helps underprivileged children in rural areas of China receive better education. His prize-winning calligraphy was once featured on a postage stamp, and he would sell samples of his calligraphy to support this charity. The memorial service for Pen-chu Chou will be held at Skylawn Funeral Home and Memorial Park, located at Highway 92 and CA-35 (Skyline Drive) in San Mateo at 10 am June 3, 2021. Instead of flowers, the family suggests donations to the Overseas Chinese Education Foundation (www.ocef.org) in Professor Chou’s memory. To ensure the health and safety of our community, we are following all guidelines set by local, state and CDC officials. If you are planning on attending a service, please contact the funeral home in advance, so that we can plan accordingly.

The family of Pen-chu ("Ben") Chou created this Life Tributes page to make it easy to share your memories.

Send flowers to the Chou family.