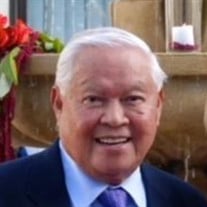 Dr. Oscar Santa Cruz Oca, dearly beloved husband, father, grandfather, brother, uncle, and friend, passed peacefully on April 17, 2021 in Half Moon Bay, CA. Oscar is survived by his wife of 64 years Barbara; his daughters Lisa and Lani; his sons-in-law Michael and Brad; and his grandchildren Zoe, Grey, Marisa and Maia. Each and every one of his 92 years was lived in joy, laughter, love and without regret. Oscar was born August 11,1928 in Manila, Philippines to Felix and Juanita Santa Cruz Oca. He was the youngest of 8 siblings. Together with his family, he survived the horrors of WW2 by hiding in the jungle until they were liberated by General MacArthur. He went on to study medicine at the University of Santo Tomas in Manila. After his graduation in 1953, he moved to the US to complete his cardiovascular and thoracic surgical residency in New York City. It was during this time that he met Barbara Lampert, an obstetrical nurse. They married in 1956 and enjoyed their early years together in Brooklyn. Oscar and Barbara eventually settled in Chardon, Ohio - a rural farming community with a new 50 bed hospital that desperately needed surgeons. Over the next 40 years, he tirelessly served the growing community of Geauga County by expanding the Department of Surgery, overseeing the development of the Medical and Surgical ICUs, performing cardiac catheterizations, placing pacemakers, and conducting countless general, vascular and thoracic surgeries. Additionally, Oscar was devoted to the Sisters of Notre Dame in Chardon and provided them with extensive medical care. Throughout his career, Oscar treated thousands of patients and saved countless lives. He had a passion for travel and great food and indulged in both with his wife and daughters as they traversed the globe. Oscar frequently visited the Philippines to be with his family and was instrumental in the development of a health care system for the dock workers and Seamens unions established by two of his brothers, Roberto and Gregorio Oca. He oversaw the building of the first Seamens Hospital in Manila and continued his partnership with Gregorio to build 3 additional hospitals throughout the Islands. These facilities provide state-of-the-art medical and surgical services for over 125,000 union members and their families. After his retirement in 1997, Oscar continued his work in the Philippines. He and Barbara also enjoyed their second home in Half Moon Bay where they could escape the cold winters of Chardon. But his greatest enjoyment was the arrival of his four grandchildren. “Papa and Grandma” spent much of their time visiting, caring for and traveling with the grandkids. When he wasn’t traveling the world, he was in his basement workshop creating beautiful dollhouses for his granddaughters and a masterful train set that evolved over 20 years for his grandson, Grey. Oscar will always be remembered for his extraordinary service, incredible generosity, love of life and joyful spirit. He touched so many lives and will live on in all of us. A blessed life, a blessed man. In lieu of flowers, we ask that you consider a donation to the Sisters of Notre Dame in Chardon, Ohio https://sndusa.org/donatechardon/

The family of Dr. Oscar S Oca created this Life Tributes page to make it easy to share your memories.

Send flowers to the Oca family.