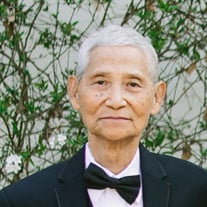 “Mao Chen Chen was born on October 6, 1931 in Shantou, Guangdong, China. At the age of 16, Mao Chen moved to Hong Kong, where he met his future wife Tek Fei Chen. They were wed on April 6, 1954 and had five children: Jennifer, Bill, Cecilia, Agnes and Charles. Over the next two decades, the Chens moved between Hong Kong and Taiwan. Mao Chen remained in Hong Kong to support the family as an accountant and construction foreman, while occasionally working as a tour guide in Taiwan. The Chens were reunited in Taiwan in 1968, and immigrated to the United States of America in 1975. They settled in San Francisco, California, where Mao Chen was employed as an accountant for the World Journal newspaper. In 1988, Mao Chen was naturalized as a U.S. citizen. Upon his retirement at age 65, Mao Chen traveled the world with Tek Fei. When they weren’t enjoying Royal Caribbean cruises, the devoted grandparents helped raise their grandchildren. Mao Chen’s lovingly prepared meals of BBQ pork fried rice, bitter melon soup, steamed fish and sweet taro paste were the hallmark of his grandchildren’s happy childhoods. He would balance driving his grandchildren to and from school with taking care of Tek Fei, who eventually succumbed to pneumonia she contracted while fighting gastrointestinal cancer in 2013. Mao Chen peacefully passed away from liver failure on July 20, 2020 in San Francisco. He is survived by his five children, thirteen grandchildren and six great-grandchildren. He will forever be remembered for his words of wisdom, most notably: “No hot, no good.” To ensure the health and safety of our community, we are following all guidelines set by local, state and CDC officials. If you are planning on attending a service, please contact the funeral home in advance, so that we can plan accordingly.

The family of Mao Chen Chen created this Life Tributes page to make it easy to share your memories.

Send flowers to the Chen family.