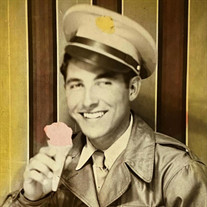 Our beloved Dad, “Daddy”, Grandpa, and Great-grandpa, Fred Lassiter Tucker, born May 6, 1924 in Kittrell, North Carolina, was promoted to heaven on March 16, 2021 to be with the love of his life, Augusta Allen Williams Tucker. If there is any man on the planet that will ever hear "Well done thou good and faithful servant" from God upon arrival, it is him. At age 9, firecrackers blew up near his face, and the debris and flash greatly diminished his sight in both eyes. His eyesight was improving, but at age 13, while building a shed, a nail on a plank popped back and took the lens from his right eye, completely blinding him. A preacher was called to his home and quoted Mark 9:47. He accepted Christ as his personal Savior that day. Our family history began one unassuming day when he thumbed a ride while in the service. He loved a good conversation (don’t we all know), but this day, the Lord had other plans for him. It just so happened that the driver had a photo album sitting on his seat next to them. Since the driver did not want to engage with him, and growing bored, he asked to flip through the album. There, he found his forever. All it took was one look at Augusta’s face, and he was smitten. He wrote her a nine page letter, she agreed to meet him, and as they say, “the rest was history”. He and Augusta Allen Williams were married on September 7, 1946, and were married until her passing 71 years later. Together they had 3 children (Patricia, Carolyn, and Stephen), 10 grandchildren (Gina, Lisa, Jud, Brett, Crystal, John, Alexander, Stephanie, Veronica, and Savannah), and 14 great-grandchildren (Cody, Keith, Jenna, Jake, Anthony, Jaden, Tristan, Sierra, Rylee, Zackry, Corbin, Enzo, Oliver, and Cora). He served 3 years in the Army during WWII. His requests to serve abroad were denied due to his vision, but was a M.P., P.O.W. guard, cook, and boxer stateside. He thumbed to California in 1946. Once settled, Augusta joined him in their new home in San Francisco. He felt led by the Lord to start a church in San Mateo. Calvary Baptist Church of San Mateo (1955-2009) first met in his living room. San Mateo Christian Academy (1983-1993) was part of the church’s outreach in the community. He was the owner of Fred Tucker’s Super Shell (1969-1989) 17th and Potrero in San Francisco. The legacy he leaves behind boggles the mind. The number of lives he touched during his time on earth through his own personal ministry, is innumerable. He was a straightforward, and generous man. Just the shirt off his back wasn't good enough. He would give someone the shirt off his back, and a car! He never met a person he wouldn't hug and love on, or punch in the mouth if they needed it. If you got out of line, he would knock you right back into it, without hesitation. However, his love for people, especially his family, was unwavering. He taught us honor, discipline, and most of all, accountability. He taught us to put others ahead of self, and above all, to honor our spouse, and sacrifice all for your marriage. He made sure his family always had a roof over their heads, and that they always had a place to go in time of need. His greatest joy was sharing the Good News of Christ with others (John 3:16). He loved to travel, and “let’s go!”, were two of his favorite words. He was an inventor, and once sent one of his ideas (for an electric toothbrush) to Colgate-Palmolive in 1951, that was rejected. He loved chocolate ice cream, and would tell us about the time that he ate so much of it, that his stomach froze over, and had ice on the outside. He always teased that he wanted to order a chocolate hamburger, once got his wish, and ate it! He had a fondness for wildlife, and loved hand feeding chipmunks at Lake Tahoe, squirrels in his backyard, and once was even “Dad” to an orphaned sparrow. He joked about being glad that in heaven he “didn’t have to carry so many keys anymore”. He had a disability, but always had the ability. He made the impossible, possible, and could fix anything! Our hero! “Only one life ‘twill soon be past, Only what’s done for Christ will last.” We love you, and you will be missed. We can only imagine the reception you received walking through heaven’s gates... To ensure the health and safety of our community, we are following all guidelines set by local, state and CDC officials. If you are planning on attending a service, please contact the funeral home in advance, so that we can plan accordingly.

Our beloved Dad, &#8220;Daddy&#8221;, Grandpa, and Great-grandpa, Fred Lassiter Tucker, born May 6, 1924 in Kittrell, North Carolina, was promoted to heaven on March 16, 2021 to be with the love of his life, Augusta Allen Williams Tucker. If... View Obituary & Service Information

The family of Fred Tucker created this Life Tributes page to make it easy to share your memories.

Send flowers to the Tucker family.