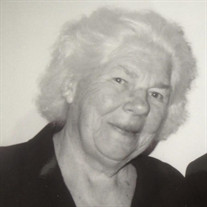 Esperanza (also known as Nadia) Dubuk was born on September 15, 1930 in Volynskaya Oblast, Ukraine. She was the only daughter born to Anton and Alexandra Kozaczuk. She was one of four siblings, John, Anatoli, and her youngest brother Andres. In 1936 hearing the threat of another war, Anton Kozaczuk sold his tiny farm and used the proceeds to purchase tickets to Buenos Aires, Argentina and then a train-ride to Encarnacion, Paraguay. Just a few years after arriving in Encarnacion, her father sold the original homestead and moved to another one between the villages of Carmen and Fram. Around the young age of 10 she lost her oldest brother John and it was soon after that that her family started attending a Pentecostal church pastored by Onisim Koval. In 1956, Nadia crossed the Parana River into Argentina. After being taken into custody for crossing without documentation, in the city of Posadas, Misiones, she was released within 48 hours after her future husband, Andres, successfully negotiated her release. Nadia eventually reached San Francisco Solano, where she lived with her brother Anatoli and her sister-in-law Elena. At the encouragement of Elena, Nadia began dating her brother’s best friend, Andres in 1956. After dating for one year, she and Andres were married in 1957. A year later they had their first son, Jorge, followed by Paul, Irene and Grace. In 1966 Nadia encouraged her husband, Andres to visit the US consulate and begin the process of completing and submitting all the necessary documents for the eventual move to the USA. Several years passed before all the paperwork was completed and passports were received for the entire family. The family arrived in the US on August 24, 1970, where they lived temporarily in Anatoli Kozaczuk’s home, who had immigrated a number of years earlier. They then moved into a house in Burlingame, which they rented from Mr. Kolesnikow. Finally, in 1972, after the birth of their youngest daughter, Genie, they purchased their own home in San Mateo where they lived for the remainder of their lives. Nadia was a loving, devoted, hardworking wife, mother, grandmother, and great-grandmother. She faithfully attended the Slavic church in San Mateo until she was diagnosed with dementia and was no longer able to attend. She lived a long, fulfilling life and passed away on her 91st birthday. Nadia leaves behind her son Jorge, daughter in law Vera, son Paul, daughter in law Nancy. Daughters, Irene, Grace, and Genie. Grandchildren Larissa and her husband Ramsey, Michael and his wife Kari, Nathan and Nicholas. Great grand-daughters Makenzie and Madison.

Esperanza (also known as Nadia) Dubuk was born on September 15, 1930 in Volynskaya Oblast, Ukraine. She was the only daughter born to Anton and Alexandra Kozaczuk. She was one of four siblings, John, Anatoli, and her youngest brother Andres.... View Obituary & Service Information

The family of Esperanza Dubuk created this Life Tributes page to make it easy to share your memories.

Esperanza (also known as Nadia) Dubuk was born on September 15,...

Send flowers to the Dubuk family.