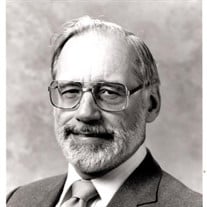 Daniel Bailey Moulton, known as “Poppy” to his family, quietly passed in his sleep on November 7, 2020. He was born in Lewiston, Maine on November 27, 1930 to Maynard Webster Moulton and Bérthe Couture Moulton. Dan graduated from Edward Little High School (Auburn, Maine) where he played football and basketball. A Naval ROTC scholarship allowed him to go to college. Only familiar with names of two colleges (Bates and Harvard), Daniel decided to not attend the local school (Bates); hence, he received his Bachelor of Arts in Geology from Harvard. He always said that he survived Harvard because of his close-knit group of other “misfits”--Aram, Wally, and Chico. Graduation, then marriage to Marjorie Ann Mahan were followed by active duty on the West Coast and being assigned to prisoner transport ships in the Korean War. Daniel was stationed at Mare Island (CA), Coronado (CA), and Oahu (HI). Finishing his active duty Daniel and his family moved to Marblehead and then Belmont, Massachusetts. He received his Master’s Degree in Mathematics from M.I.T. under the G.I. Bill. He worked with early computers, a skill which allowed him to move to California again and work for Standard Oil of California (Chevron) where he became a premier “trouble shooter”. Daniel took several business trips to Saudi Arabia, always making sure there were layovers in places such as Rome or London. Retirement from the U.S. Navy occurred after 22 years of active and reserve duty. Daniel was honored to have attained the rank of Commander. Retirement from Chevron came later. Daniel’s time in retirement was spent playing and composing music, taking nature photos, learning about native plants, and reading everything and anything he could get his hands on. He always loved the outdoors, camping and backpacking with family. Daniel and Marjorie made several trips with their AirStream club. Some of the more memorable travels included Churchill in Manitoba, Canada in order to see polar bears, Alaska, the Kamchatka Peninsula in Russia, Australia, and New Zealand. Daniel is survived by Marjorie,his wife of 67 years; daughter Michal (Kee Chong); son David; grandchildren Bradford, Rachel (Jeff), Régine (Chris), Brendon; great grandchildren Wren and Olivia. He is preceded in death by a grandson, Daniel, and just recently joined in death by his sister, Geri or Geraldine. Peter, Dan’s brother, lives in Maine. Poppy will be sorely missed by his close, as well as extended, family and many friends made over the years. Fond memories of family vacations at Donner Lake, holiday/birthday celebrations, and numerous meals (with good wine) will continue to make us smile and be grateful that he was in our lives. Interment of ashes at Skylawn Memorial Park and a private memorial will happen in the future when it is safe for family members to travel from Oregon and New York.

Daniel Bailey Moulton, known as &#8220;Poppy&#8221; to his family, quietly passed in his sleep on November 7, 2020. He was born in Lewiston, Maine on November 27, 1930 to Maynard Webster Moulton and Bérthe Couture Moulton. Dan graduated from... View Obituary & Service Information

The family of Daniel Moulton created this Life Tributes page to make it easy to share your memories.

Daniel Bailey Moulton, known as “Poppy” to his family, quietly...

Send flowers to the Moulton family.