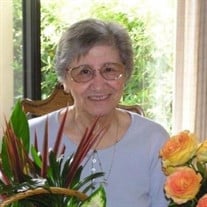 Barbara Ramos Salsedo - a remarkable woman who demonstrated strength, intelligence, and above all, love for her family — passed into eternal rest on Thursday, May 7, 2020, in Redwood City, California, after a diagnosis of cancer two months prior. Barbara was married to her beloved husband, Peter, for 47 years before he preceded her in death in 1995. Before that, her mother, Mercedes Colon Ramos, who lived with Barbara and her family for 41 years, passed away in 1991. Barbara is survived by her three grown children, Paula, Lydia, and Peter. She was blessed with 4 grandchildren, 13 great-grandchildren, and 1 great-great grandchild. She enjoyed getting together at family reunions, where she was lovingly known as “Grandma 2.” Barbara was born on March 31, 1925, in Honokaa, Hawaii, to Joseph and Mercedes (Colon) Ramos. She often expressed gratitude that her family did not suffer the ravages of the Great Depression because they had enough land to grow their own food. She was an excellent student who was serious about learning in spite of the fact that opportunities were limited in their small country village. At the age of 16 after an early graduation from high school, she moved to Honolulu where she soon found a job in a café near Pearl Harbor. Not long after, the infamous bombing of the naval base took place, launching the country into World War II. Barbara told many fascinating stories of life during the war, with blackouts and rations, and interactions with soldiers from Pearl Harbor. During this time, she enrolled in secretarial school, where she learned shorthand, a skill she never forgot. She soon obtained a job with the Department of Defense at Pearl Harbor. She met Peter through mutual friends and within a year they were engaged. Six months later, they married in 1948. In 1957, Peter and Barbara moved their family to Redwood City, California where she lived for 63 years. They were both employed by the US Navy as civilians, and were able to transfer from Pearl Harbor to Hunters Point. She was a proud federal retiree, having worked for the US Navy for 20 years as a statistician. After retirement Barbara was active in several organizations, including the National Active and Retired Federal Employees (NARFE) association and Fun After 50. She served for many years as an officer on various boards, including multiple terms as president, secretary, and treasurer. She was active at the Redwood City Senior Center where she volunteered in many capacities, including serving meals, as a bingo caller, and in other supportive roles. Bingo was her favorite social outlet. She had many friends through the senior center activities, especially bingo. For more than 60 years, she followed the San Francisco Giants baseball team with a passion, never missing a game on TV or radio. She loved sports and preferred to watch a sporting event over all other entertainment. Game shows were a close second. One week before she passed away, she was still able to answer questions on Jeopardy and solve puzzles on Wheel of Fortune. Barbara is survived by her 3 children: Paula (Dick) Cullen of Spokane, Washington; Lydia Salsedo of Don Benito, Spain; and Peter Salsedo of Redwood City, California; 4 grandchildren: Chris & Annie Cullen of Colorado Springs, Colorado; Chad & Renee (Cullen) Vandouris of Spanaway, Washington; Aaron & Joy (Cullen) Holsinger of Eagle, Idaho, and Rich and Tamara Cullen of Spokane, WA; 13 grandchildren: Alex, Nick, & Ashley Cullen; Bo & Brittany (Vandouris) Rainwater; Jessica & Ben Vandouris; Isaiah, Trinity, & Reese Holsinger; Mercedes, Charlotte, Nora, & Sylvia Cullen. Her pride and joy was a 5th generation great-great granddaughter, Bradleigh Joy Rainwater. Barbara brought much joy to those around her. She was a “people person” who loved to serve others and socialize with her friends, which she did until just before her recent illness. She left the world a better place. She adored her husband, children, and grandchildren; she blessed her friends in countless ways; and she ultimately followed Jesus Christ into eternity. To those who love her, she will be mourned and missed the remainder of their days. To ensure the health and safety of our community, we are following all guidelines set by local, state and CDC officials. If you are planning on attending a service, please contact the funeral home in advance, so that we can plan accordingly.

Barbara Ramos Salsedo - a remarkable woman who demonstrated strength, intelligence, and above all, love for her family &#8212; passed into eternal rest on Thursday, May 7, 2020, in Redwood City, California, after a diagnosis of cancer two months... View Obituary & Service Information

The family of Barbara R. Salsedo created this Life Tributes page to make it easy to share your memories.

Send flowers to the Salsedo family.