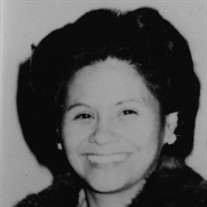 Antonia Ubaldo Padua (1927-2022) Antonia (Toni) Ubaldo Padua died peacefully from natural causes on Thursday, March 3, 2022 in Campbell, CA where she resided. She is now reunited with her husband of thirty-four years, Pedro M. Padua (1915-1988). Toni, also known as Nening, was born on June 13,1927 in Manila, Philippines to Gregorio Ubaldo (1901-1987) and Clara Fajardo (1909-2002). She was predeceased by her two siblings, Consuelo Resella (1925 -2021) and Mario F. Ubaldo (1930-2014). Toni learned during her childhood that her name had been chosen due to the chiming of the church bells at St. Anthony of Padua Catholic Church in the Malate district of Manila at 4 pm on the day she was born. June 13th is the anniversary of the death of St. Anthony, and the commemoration by the church was the inspiration for Toni’s mother to name her second daughter, Antonia. Following the Catholic religious tradition, Toni was christened at the Manila Cathedral in Intramuros. She was raised in a wealthy household that was eventually lost in the Japanese occupation of the Philippines during World War II and the 1945 Battle of Manila. Toni’s struggle to help the family survive during the Japanese occupation was considered heroic by family members. Of particular note was her ability to shrug away the horrors of warfare during the Battle of Manila and go with her brother Mario to bravely find food for the family’s survival. After the war subsided, Toni’s mother Clara established a restaurant to support the family and Toni worked with her in it. It was at her mother’s restaurant that Toni met Joseph Horne, an American serving in the US Merchant Marines. They were soon married and Toni later gave birth to her first son, Joseph. Toni’s husband tragically died soon afterward, leaving her a young widow and single mother. Toni and her son Joseph emigrated to America in 1951 to seek a better life with her mother Clara in San Francisco, CA. Three years later, Toni was introduced to Pedro M. (Pete) Padua, the President of the San Francisco Filipino Community Center, Inc. It was love at first sight and they were married at St. Gabriel’s Church on July 31st 1954. They established their home in San Francisco and raised four children there along with Pete’s niece, Ester Bradshaw. Toni and Pete were strong advocates for higher education, especially for their children. They also opened their home to many relatives from the Philippines who had come to the United States seeking new opportunities. Toni enjoyed hosting family members relocating to America and serving as an informal San Francisco tour guide for visitors from the Philippines. Toni was known to have an independent spirit, lived a big life filled with generosity. She was considered a trail-blazing woman ahead of her age and relished her role as family matriarch. She was affable and magnetic, and her laughter was infectious. She loved music and dancing, and throwing parties. She thoroughly enjoyed going out to the movies, and always kept in step with fashion trends throughout her life. She was worldly and loved international travel. Toni will be remembered for her strength of character as family matriarch, as a devoted wife, a giving and proud mother, auntie, sister, grandmother and great grandmother. She will be remembered for her joy, love and laughter, and her genuine willingness to help others. Toni is survived by her sisters, Geraldine Lanier and Victoria Antonio, her three sons, Joseph H. Padua, MA, and his wife Jacqueline; Thad Padua, MD and his wife Rosemarie, MD; Pedro M. Padua Jr., MA and his wife Maricon, MSN, RN; only daughter, Mary G. Padua, PhD, RLA and her life partner, James A. Robins, PhD; eight grandchildren: Lt. O.J. Leonardo, SFFD; Tina L. Schroeder, MA, and husband Aaron; Alex Padua and his wife Kaylyn; Jennifer Padua; Ilyssa Padua, MSN, RN, NP; Irina Padua, MD and her spouse, Sarah Paul, MD; and Ysabella and Sophia Padua; and five great grandchildren: Lucas Leonardo; Madison Schroeder; and Ellia, Haven and Judah Padua. Funeral services will take place at Skylawn Funeral Home and Memorial Park on Hwy West 92 at Skyline Blvd in San Mateo, CA. The Vigil (Wake) will be held on Friday, March 18th from 4 to 8 pm in Skylawn’s Pacific Chapel with snacks catered by Tastebuds and Nemia Mayuga. Funeral Mass will take place on Saturday, March 19th, 10:00 am at St. Gregory Catholic Church, 2715 Hacienda Street, San Mateo, CA 94403. Father Sergio Ovando will preside over prayers at the Friday Vigil and Saturday Mass with a special prayer by Bishop Emeritus McGraw. After the Mass, she will be laid to rest at Skylawn Memorial Park with final blessings and prayer led by Father Sergio Ovando. Following her burial service, a reception catered by Tastebuds will be held in Skylawn’s Vista Room. Toni was a member of the Capuchin Mission Association and regularly donated to the Capuchins Franciscans Western American Province of Our Lady of Angels. Family members encourage you to donate to the Capuchin Mission Association to honor her memory.

The family of Antonia Ubaldo Padua created this Life Tributes page to make it easy to share your memories.

Send flowers to the Padua family.