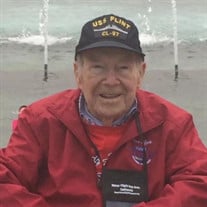 Alexander Newbold was born in Milford, New Hampshire on August 5th 1921 and died in Belmont, California on August 15th 2020. He was predeceased by his loving wife of 59 years, Esther (Miller) originally from Venturia, North Dakota. Al and Esther had four sons, William, John, Kent and Scott. Alexander's family moved from Milford, New Hampshire to Vinalhaven, Maine when Alex was 3 years old. He spent his boyhood there on his "Isle of Happiness", messing around with boats and loving life as a boy on the coast of Maine. His father worked in the granite quarries there which provided a modest income during very harsh times. The granite industry started shutting down after the depression so the Newbold family, Alexander's mother, father , brother and 2 sisters returned to Milford, New Hampshire where Alex (now 13) went to High School. During his high school years he became interested in Amatuer Radio which developed from a hobby into a career and passion. He enrolled in the Merchant Marine Radio School in Boston, Massachusetts, which was located on Gallups Island in Boston Harbor. After graduating he was assigned to a merchant vessel in the US Maritime Service, sailing the waters of the Carribean and Gulf of Mexico. This was during the early years of WWII. In March of 1943 Alexander enlisted in the U. S. Navy and spent the remaining war years in the Pacific as a Radioman 1st Class aboard the USS Flint. His ship was involved in campaigns in the Phillippines, Taiwan and the coast of China. Additionally his ship saw action in Iwo Jima and Okinawa. He stayed in the Navy until February of 1946. After the war ended, Alexander was discharged fom active service in San Francisco. He met his gal, Esther ( then living in Stockton, California) in Santa Cruz (on the beach). They were married in Stockton in June of 1946. They bought their first home in South San Francisco in 1947, then moved to Belmont in 1959. He was employed as a radio operator for TWA , as a radio mechanic for United Airlines (for a short period) returned to TWA and finally retired from Aeronautical Ratio Inc (ARINC) as a radio operator in the Late 1980's. Al was an active member of Methodist churches in South San Francisco, Belmont, and Hillsdale United Methodist Church in San Mateo. Besides his hobby of amateur radio; he enjoyed tinkering around the house and garage. He was an active member of the Freemasons and was awarded the "Hiram Award" for devoted service in August, 1984. Besides his four sons, Alexander had 7 grandchildren, and 9 great-grandchildren. They live in locations widely dispersed in the United States from Falmouth, Maine, and Antrim, New Hampshire to Steamboat Springs, Colorado, the Dallas,Texas Metropolitan area, and to Southern California reflecting Alexander's life, ties and interests on both coasts and in the middle of his country. Funeral services for Alexander will be on Monday, August 24th at 10 am at Skylawn Memorial Park at the intersection of highways 92 and 35 in San Mateo. Pre service testing will be in place and all participants must wear a mask. In lieu of flowers donations may be made to the Shriner's in your area.

Alexander Newbold was born in Milford, New Hampshire on August 5th 1921 and died in Belmont, California on August 15th 2020. He was predeceased by his loving wife of 59 years, Esther (Miller) originally from Venturia, North Dakota. Al... View Obituary & Service Information

The family of Alexander S. Newbold created this Life Tributes page to make it easy to share your memories.

Alexander Newbold was born in Milford, New Hampshire on August...

Send flowers to the Newbold family.