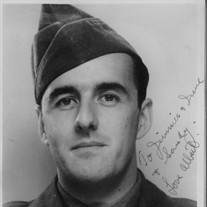 Al Bertoli August 3, 1920 - March 10,2021 We all lost a special man when Al Bertoli passed away Mar 10 at 100. Al was born and raised in the Cow Hollow district of San Francisco. He loved Bocce, fishing, hunting, his friends, and especially his family. He joined the army in 1943 and was attached to the 335th Infantry Regiment, 84th Infantry Division. As they fought their way through France, Belgium and Germany they saw continuous action including The Battle of the Bulge. Returning from the war he married Anna Biagi, raising her three children, Barbara, Sandy, and Ernie as his own. For over 40 years Al’s trade was as a butcher and in the early 70’s he opened a janitorial business on the side. Except for a short time in Petaluma, AL and Anna lived their lives in San Mateo and Belmont. After Anna passed in 2006, Al was fortunate to meet the 2nd love of his life, Shirley Volpi. For the next 14 years they were a couple in love: dancing, socializing, traveling and just having a great old time. She was incredibly devoted to Al, especially these last 2 ½ years as Al was cared for at the VA in Menlo Park. The family would like to thank the doctors, nurses and staff for the outstanding care and companionship they offered Al during his stay. Al is predeceased by Anna’s three children, Barbara Zamora, Sandra Piazza and Ernie Biagi. Al is survived by his grandson Anthony Biagi, his great granddaughter Harper, daughter-in-law Donna Biagi, his sister Gloria D’Acquisto, her sons Rodney (Gretta) and Gary D’Acquisto, great nephews Mark and Adam D’Acquisto, great nieces Jamie LaChapelle, Brooke Agresti, Alexa D’Acquisto. He is also survived by 9 great, great nephews and nieces who enjoyed his stories and salty language. They loved him dearly. Rest in Peace Al There will be a Memorial Service at a later date Donations in Al’s memory can be made to: Palo Alto Dept. of Veterans Affairs, 795 Willow Rd. Menlo Park, CA 94025 MC: 640-135MPD

Al Bertoli August 3, 1920 - March 10,2021 We all lost a special man when Al Bertoli passed away Mar 10 at 100. Al was born and raised in the Cow Hollow district of San Francisco. He loved Bocce, fishing, hunting, his friends, and especially... View Obituary & Service Information

The family of Albert Bertoli created this Life Tributes page to make it easy to share your memories.

We all lost a special...

Send flowers to the Bertoli family.