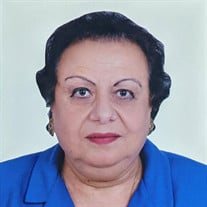 Zezaf Mekhail passed away on January 2, 2021 in Redwood City, California at the age of 85. Zezaf was born on June 14, 1935 in Alexandria, Egypt. She was one of 6 children in her family. In 1953, she married her habibi Jimmy, who was a colonel in the Egyptian Navy. They were together for 44 years until his passing in 1997. Between 1954-1962, Jimmy and Zezaf had 2 daughters and 3 sons – Minerva, Magdalena, George, Magdy, and Joseph. Their children grew up and, one by one, they each immigrated to the United States and eventually settled in North Carolina, California, Illinois, and Florida, respectively. For years, Jimmy and Zezaf travelled to the US to see their children and grandchildren, spending anywhere from 3-6 months at a time here and the rest of the year at their home in Egypt. After Jimmy’s passing, Zezaf kept this tradition alive for many years to come. She eventually moved to the US to live here permanently after the Egyptian revolution in 2011. Zezaf will be remembered for her kind eyes and smile, her strong heart, and her fighting spirit. She had a great sense of humor, her face always lit up when she saw her grandkids and great-grandkids, and she loved playing with the family dog. She was a fighter, and she never let anything keep her down. Even a significant health scare years ago was no match for her; even though the doctors weren’t sure she would survive, she made nearly a full recovery and lived on for years thereafter. Her tenacious spirit was inspiring, and it will live on in the hearts of her family and friends. Zezaf is survived by her brother and sister, 5 children, 10 grandchildren, and 7 great-grandchildren, all of whom loved her to pieces and will miss her very much.

Zezaf Mekhail passed away on January 2, 2021 in Redwood City, California at the age of 85. Zezaf was born on June 14, 1935 in Alexandria, Egypt. She was one of 6 children in her family. In 1953, she married her habibi Jimmy, who was a colonel... View Obituary & Service Information

The family of Zezaf Zaki Mekhail created this Life Tributes page to make it easy to share your memories.

Send flowers to the Mekhail family.