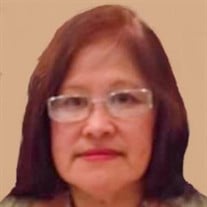 Zenaida Aspiras Fernandez, (also known by her friends and close relatives as Aida) age 69, long time Half Moon Bay resident died at her home on August 31, 2021. Aida was born in Agoo, La Union, Philippines on January 4, 1952. She was 17 years old when she arrived in the United States on June 27, 1969. Her dad was a Navy veteran and served in WWII. After the war, he settled back in the Philippines after an arranged marriage and had 7 children. Aida was the first born of the 7 children. Due to her Dad’s US citizenship requirement, in order for the children to maintain their US citizenry, they must be on United States soil before they reach the age of 18, hence, Aida and her sister Myrna were the first ones to arrive in the United States. They settled in San Francisco renting a room from Auntie Felisa while going to school. She worked in the tomato field and pear harvesting during the summer months in Dixon, CA. Aida finally settled in Half Moon Bay when her parents bought their first house on Filbert St. Aida loved her family, her garden and her dog “Brownie.” Her vegetable garden is always lush and the fruit trees bear plenty of fruits and her orchids and hydrangeas always bloom beautiful flowers. She grew apples, plums, peppers, lemons, taro, onions and chayote. She was a nurturer and a hard worker. She worked for Seton Coastside for over 40 years as a nursing assistant. She didn’t see her job as just a job but adored the number of people she took care of and held the nurses oath. As a nursing assistant she built a stable home for her four children and supported other relatives. She encouraged her children to become part of the health care industry and imparted to them the joy and responsibility of truly helping others at their greatest need. Her children took heed of her advice and her two sons, Mark and John are now LVNs and Jacqueline is at HICAP a Medicare Counseling Program as well as personal care giver. She is survived by her children: Jacqueline, Mark, John, and Christine. Grandchildren: D’Andrew Manolo Amiga, Christian Amargo and newest member Eden Isabella Fernandez Marcelo, her adored daughters-in-law Rosa Marcelo and Jenn Gong Fernandez; the father of her grandson, D’Andrew, Andrew David Amiga. She also leaves behind her sisters Ofelia Fazackerley in Pacifica, Myrna Navarro and Marieta Aspiras in San Diego and Peter Aspiras, Jr. in Los Angeles. She is preceded in death by her beloved dog Brownie who passed away August 12, 2021.

Zenaida Aspiras Fernandez, (also known by her friends and close relatives as Aida) age 69, long time Half Moon Bay resident died at her home on August 31, 2021. Aida was born in Agoo, La Union, Philippines on January 4, 1952. She was 17 years... View Obituary & Service Information

The family of Zenaida Aspiras Fernandez created this Life Tributes page to make it easy to share your memories.

Zenaida Aspiras Fernandez, (also known by her friends and close...

Send flowers to the Fernandez family.