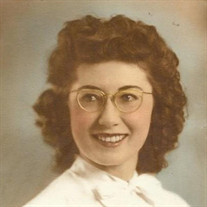 Vivian Myrlan Morris was born on December 22, 1919, in Central Indiana near Boyleston, Clinton County and passed away on December 19, 2021, in Redwood City, CA, just 3 days shy of her 102nd birthday. She is survived by her sons Joe and Bill... View Obituary & Service Information

The family of Vivian Myrlan Lindsey created this Life Tributes page to make it easy to share your memories.

Send flowers to the Lindsey family.