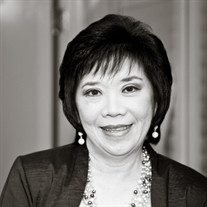 Gifted musician and dedicated mother, Vilai Agvateesiri was one of the gentlest and kindest souls. Always the first to be sure that everyone around her was well taken care of, Vilai was the oldest child of Boonliang and Vantanee Agvateesiri. She was born on June 28, 1950 in Hat Yai, Thailand. Vilai developed a passion for playing the piano and became a piano teacher early in her career. In 1980, she married Chao Thupsard and a year later, they welcomed their daughter, Lilynda. In 1983, Vilai moved to the United States with her parents and Lilynda to pursue opportunities for a better life. Vilai and her family lived in New York and New Jersey for four years. She began a new career in financial services, working for a bank in the World Trade Center. In 1987, she and her family moved to San Bruno, where she has lived ever since. She was a devoted daughter who took care of both her parents while also raising her daughter on her own, and she worked full time as a highly skilled mortgage professional for over 20 years. Although Vilai spent her final years retired from her longstanding career, she remained committed to her role as a caregiver to her family, which included her mother with dementia, and two young grandchildren. In July, Vilai was diagnosed with stage IV colon cancer. On November 27, she passed away peacefully surrounded by her closest family at her daughter’s home. She is survived by her daughter, Lilynda; son-in-law, Jonathan; two grandchildren, Davon and Valeena; mother, Vantanee; sisters, Vimon, Mary, Anna, Salina, and their families. Vilai was kind, loyal, nurturing and steadfast. Her life of giving has allowed her entire family to thrive and live well. Vilai loved spending quality time with her family, playing the piano, cooking delicious meals, and serving the Lord. Her warmth and generous nature will forever be missed, but never forgotten.

Gifted musician and dedicated mother, Vilai Agvateesiri was one of the gentlest and kindest souls. Always the first to be sure that everyone around her was well taken care of, Vilai was the oldest child of Boonliang and Vantanee Agvateesiri.... View Obituary & Service Information

The family of Vilai Agvateesiri created this Life Tributes page to make it easy to share your memories.

Send flowers to the Agvateesiri family.