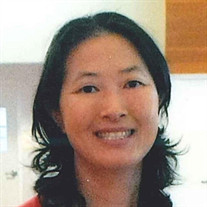 With a heavy heart, we announce that Victoria Ann Geen-Lew ,51, peacefully passed away, battling cancer, at home surrounded by her family and friends on September 20, 2020. Born in Stockton, CA on February 18, 1969 to Henry Y. and Jayne (Lui) Geen, she was the second of four siblings. She graduated from Notre Dame High School (Salinas) in 1987 and Fresno State University in 1991 with a B.S. in Criminology. Her first job she enjoyed most was working for an insurance company that involved undercover surveillance for workers comp claims. She then went to work for Household Bank and was part of a team that helped encode security numbers into the magnetic strip. Her other employment opportunities included financial institutions, such as Union Bank, San Mateo Credit Union, where she got a taste of working for non-profit. Victoria also delved into fraud investigation aspects of ATM’s and credit cards and in between, she would help out at her family restaurant in Carmel. Victoria met Michael on a Christian hiking trip in 2000 and married in 2001. They loved to travel bringing them to ocean destinations like Tahiti, Cancun, Hawaii, Santa Barbara and other beach destinations before settling down and starting a family. Their daughter Meigan, 14 and son Luke, 12 were her pride and joy. A devoted mother, she enjoyed vacationing, playing board games and was sort of a “gamer” playing along with the kids. She was very proud of the accolades each made in their classroom as well as in sports, most recently, with golf. Her last place of employment was with the Palo Alto Unified School District as an administrator specializing in Risk Management where she was a liaison between the school, parents, and public officials regarding public health concerns and safety. Victoria displayed a wonderful knack of solving problems and building community support. Victoria first showed interest in God in her early teen years where she first attended church with her younger brother. She was eager about learning why there was evil in the world and why God doesn’t fight against it. Through the years her faith and trust in God became apparent and while suffering through the cancer she grew tremendously close to God through spiritual guidance, prayer and healing. She came to understand that God was carrying her and fighting for her to get through her most challenging times. She knew God would contend against those that would contend against us...like her illness. Victoria truly lived life to the fullest through simplest pleasures and was most comfortable around family and friends but Nature was a big part of her as well. Hiking at Muir Woods and Yosemite Park tops her list as well as swimming, where she and her siblings learned at the family home in Creve Coeur, MO. Her favorite color growing up was green but in recent years, hues of purple and lavender became her favorite. She enjoyed helping others and she made friends everywhere she went. Through her travels, friends have become part of the family from all over the world, which explains her love of food from a variety of cuisines. Victoria will be remembered as a loving and devoted mother, wife, daughter, sister and friend. She was soft spoken, kind hearted, generous, humble, strong-willed and when she laughed, it was hard not to laugh along with her. Victoria fought bravely for seven years until the Lord called her home. She is survived by her husband, Michael Chan Lew, daughter, Meigan Lew, son, Luke Lew; parents, Henry and Jayne Geen, sister, Rosemary (Sam) Voong, brother, Gregory Geen, and Deanna (Brian) Jung; Ghirardelli “Gary”( their family dog), numerous in-laws, aunts, uncles, cousins, nieces and nephews. She is preceded in death by her grandfather, Lui Moon, grandmother, Lui Shui Ying and Toby, their first family dog. In lieu of flowers, the family request donations be made in honor of Victoria to Lampstand Prayer Ministry, Bridgeway Church or a favorite charity. To make a donation to Victoria's "GoFund Me" account, please copy and paste the link below: gf.me/u/yzmrij

With a heavy heart, we announce that Victoria Ann Geen-Lew ,51, peacefully passed away, battling cancer, at home surrounded by her family and friends on September 20, 2020. Born in Stockton, CA on February 18, 1969 to Henry Y. and Jayne (Lui)... View Obituary & Service Information

The family of Victoria Ann Geen-Lew created this Life Tributes page to make it easy to share your memories.

With a heavy heart, we announce that Victoria Ann Geen-Lew ,51,...

Send flowers to the Geen-Lew family.