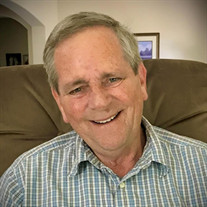 Timothy Sayers McGrath, beloved father and grandfather, husband, brother, uncle, coach and friend, who proudly served his country and his community, and loved his family unconditionally, passed away at home in Oroville, CA on Wednesday, February... View Obituary & Service Information

The family of Timothy Sayers McGrath created this Life Tributes page to make it easy to share your memories.

Send flowers to the McGrath family.