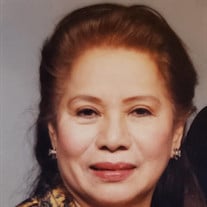 Sylvia, 87.5 years old of Redwood Shores, CA, passed peacefully on the evening of Apr 10, 2021 in her daughter’s home. Her youngest sister and three daughters were by her side. She was born on Aug 13, 1933 in Malate, Philippines to Dr. Potenciano and Ignacia “Nancy” Unalivia. Her father was a medical doctor and her mother was a schoolteacher. She attended schools in Malate and was proud to say she was on her high school diving team. She went on to St. Luke’s Nursing School to pursue her nursing degree. She worked at St. Luke’s Hospital in Quezon City and it was during this time when she met her future husband Orelli B. Sadueste at a party. After 3 years of courtship they were married on Mar 29, 1959 and would’ve reached their 60th wedding anniversary in 2019, but Orelli passed just 4 months before. Sylvia was a floor nurse then became the Employee Health Nurse for Mills-Peninsula Hospital in San Mateo, CA for 27 years until she retired at 61 years old. She enjoyed her nursing career. She was the “In-House” doctor for her husband and daughters even when her daughters became adults. She would even tell the doctors what type of tests to be ordered. We’re sure the doctors loved that! Sylvia and Orelli also owned a liquor Store in San Mateo and ran an Amway business as Direct Distributors while maintaining full time jobs. She enjoyed dancing, singing, traveling, crocheting, reading biographies, going to shows and musicals, and eating her sweets and ice cream. She also loved Tom Jones! She is survived by her daughters Renzi S. Miller (Roger), Reena S. Carvallo (Julio), and Rizza S. Burke (Tom), her grandchildren Jaizi, Jaren (Moira), Melissa, Dominic, Natalia, Andre, Alyssa, Nathaniel, her first great grandchild Elijah Leigh born to Jaren and Moira Abedania, and her youngest sister Mitos U. Holt. She was preceded in death by her infant son Robert U. Sadueste. She will be missed for her zest for life, her encouraging words, and her forgiving nature. She was a devoted wife and nurturing mother. Funeral Service will be held at St. Mark Catholic Church located at 325 Marine View Ave., Belmont, CA 94002 on Apr 21, 2021 with 10-10:30am viewing and 10:30-11:30am service.. To ensure the health and safety of our community, we are following all guidelines set by local, state and CDC officials. If you are planning on attending a service, please contact the funeral home in advance, so that we can plan accordingly.

Sylvia, 87.5 years old of Redwood Shores, CA, passed peacefully on the evening of Apr 10, 2021 in her daughter&#8217;s home. Her youngest sister and three daughters were by her side. She was born on Aug 13, 1933 in Malate, Philippines to Dr.... View Obituary & Service Information

The family of Sylvia Unalivia Sadueste created this Life Tributes page to make it easy to share your memories.

Send flowers to the Sadueste family.