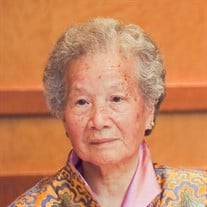 SUN TSAI LAM (林新齊) April 19, 1928 (4月19日1928年, 舊曆) - July 7, 2021 (5月28日2021年, 舊曆) It is with great sadness that we announce the passing of Sun Tsai Lam, 93, on July 7, 2021, in San Francisco, California. She was born in Toisan (台山), Guangdong, China in 1928, and married in 1946, raising three sons and a daughter. She moved to Hong Kong in 1972, then immigrated to San Francisco in 1985, where she has since resided. Best known as ‘po po’ (婆婆), grammy, or grandma, Sun Tsai was a fierce, passionate, independent woman and matriarch of the family. She could often be found walking to the local markets and stores, making soups for hours, cooking, gardening and tending to blooms of flowers, watching the occasional chinese soap opera, or looking at pictures of her great-grandchildren and family. She was caring, thoughtful, and generous, always offering food to everyone she met. She showed her love through food, making sure she made enough to share with neighbors, friends, and family. Sun Tsai was preceded in death by her three brothers and sister, her husband Wing Kwan (林荣均), and her daughter Amy. She is survived by her sons Ling Chiu, Ling Hu, and Ling T.; 14 grandchildren: Sarina, Eva, Ming Shun, Minghui, Kimberly, Bryan, Vivian M., Joanna, Wilma, Heather, Wency, Megan, Chelsey, and Eric; 16 great-grandchildren: Carol, Vivian W., Michael, Gabriel, Joyce, Sophia, Michelle, William, Ethan, Aiden, Anna, Adam, Preston, Jordan, Avery, and Kingston; and several nieces and nephews. A funeral service will be held on Friday, July 23 at 10:30am in the Pacific Chapel, at Skylawn Funeral Home & Memorial Park, off of Hwy 92 at Skyline Blvd., San Mateo, CA 94402. The burial at the Imperial Garden will occur directly after the service. Viewing hours will be available prior to the service, beginning at 9:00am.

The family of Sun Tsai Lam created this Life Tributes page to make it easy to share your memories.

Send flowers to the Lam family.