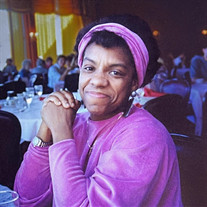 Ms. Sigrid Rose was a beloved daughter, sister, mother, partner and friend.  She had the most beautiful smile and friendly spirit that could light up your soul!  Sigrid Laurel Rose, 69, of Mountain View, California, passed away to eternal rest on Wednesday, February 24, 2021.  She was born on March 10th in Jamaica West Indies, the daughter of Eric Rose and Barbara (Rose) Truttling. She came to the United States when she was two-years old and lived in Brooklyn, NY until early adulthood. Forever young at heart, Sigrid had an abundance of affection, love and compassion for everyone; regardless of creed, religion or ethnicity, because she embraced diversity and the belief of only one race- the human race! She was a global spirit and spent a few of her college years as an exchange student in Europe, which gave her access to meet people of different countries; speaking many languages, each with various cultural practices and food! Sigrid was conferred a Bachelor of Science Degree in Medical Technology, with a minor in German. She began her career working in the Biochemistry lab of Brooklyn Jewish Hospital in New York and became a member of the American Association of Clinical Chemistry. It didn’t take long before those around her witnessed her level of excellence and dedication to her work and the people she encountered daily. So it is no surprise that such a shining star would show up on the radar of a Medical Diagnostics company in Palo Alto. When they offered her a Technical Consultant position, Sigrid embraced this good fortune and head to the West coast to explore the new opportunity. She continued to approach her career with the same passion and loyalty for 42 years; earning the accolades from clients such as “…to me she has gone out of her way…to provide a service that has been above and beyond her duty…”. Also, the CEO of her most recent employer expressed to her family that, “Her commitment to her colleagues, customers and team will have a lasting impact on all of us that she interacted with…” If you knew Sigrid, you also knew her love for the galaxy and the mysteries it holds; in her soul she was part of the NASA team working on establishing contact beyond our earthly existence. Since she couldn’t travel the stars, she fulfilled her hodophilia globally by traveling to several countries throughout the years (experiencing 5 of the continents-she missed Antarctica and Australia). Sigrid was also very grounded by her love for family and friends. She wanted nothing more for them, than to have a wonderful life; making her an inspiration and illumination for people.  Sigrid is preceded in death by her parents, Eric Rose, Barbara (Rose) Truttling and infant daughter, Erica Michelle Rose. Survived by her Stepfather and Stepmother; Sisters, Brothers, Life Partner, Nephews, Nieces and numerous Aunts, Uncles, Cousins and Friends.  Sigrid will be deeply missed by all who knew and loved her. Let us all strive, in her loving memory, through daily good deeds with kind hearts. In lieu of flowers, you can make a donation to either of these organizations she supported: Feeding America https://secure.feedingamerica.org/site/Donation2;jsessionid=00000000.app20023b?29490.donation=form1&df_id=29490&s_subsrc=2021test-b&idb=396364500&26876.donation=form1&mfc_pref=T&NONCE_TOKEN=230870C6D36D58E64A91A52F65A87904&s_channel=google&s_onsite_promo=MainNav_Donate&s_src=W213ORGSC&26876_donation=form1&s_referrer=google&_ga=2.162998524.1920462191.1615148326-1242784861.1615148326 Doctors Without Borders https://donate.doctorswithoutborders.org/onetime.cfm?type=tribute&_ga=2.120988939.2042052434.1615148166-841829378.1615148166 This poem was an inspiration to Sigrid, may it be the same for you. “Trust in God” Let nothing disturb you, let nothing cause you fear All things pass. God is unchanging. Patient obtains all; Whoever has God needs nothing else. God alone suffices. A private family interment will be held on Sigrid’s birthday. In the future, if you are in the neighborhood, stop by and spend a moment with her at: Skylawn Funeral Home and Memorial Park San Mateo, California  Columbarium of Tribute, Tier F, Niche 4 **During the Covid Period, please call before your visit.

Ms. Sigrid Rose was a beloved daughter, sister, mother, partner and friend. &#8239;She had the most beautiful smile and friendly spirit that could light up your soul!&#8239; Sigrid Laurel Rose, 69, of Mountain View, California, passed away... View Obituary & Service Information

The family of Sigrid L. Rose created this Life Tributes page to make it easy to share your memories.

Send flowers to the Rose family.