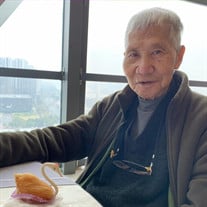 Shiu Chang (Mark) Chu, a devoted family man, passed away on August 13th, 2020 at the age of 88 in Hayward, California. Shiu Chang is survived by his three sons, David Chu, Terry Chu, and Robert Chu; and his grandchildren Melinda Ng, Sharon Chu, Adrian Chu, Athan Chu, Sabrina Chu, and Alton Chu. He is predeceased by his father, Hui Nan Chu; his mother, Mei Hua Chen; and his loving wife, Shiu Lam Lee. Shiu Chang was born in Shanghai on November 4th, 1932. After college, he worked as a senior telegraph operator for China Telecom Corporation starting in 1951. In 1964, he married Shiu Lam Lee, his college sweetheart and a telegraph operator from the same company. Together they welcomed three sons in 1965, 1968, and 1970. Shiu Chang was a relatively reserved and easy-going person, and he was always willing to listen to the feelings of others and put their needs before his own. This was what made him such an incredible friend and loving family member, and gained him respect and trust even from strangers he had just met. He often kept to himself at gatherings, because all he needed was to enjoy the warm, lively atmosphere of his family and friends. Shiu Chang was also quite the jokester, and his tendency to bring laughter in the most sudden and random moments was loved and appreciated by all. He was extremely appreciative of music, especially classical music, and dancing. He enjoyed watching football (soccer) matches as well. He will be deeply missed by his friends, family, and all who knew him and whose lives and hearts he had touched. The family will have a private viewing from 10-10:30, after which a memorial service will be held at Skylawn Funeral Home on Saturday, August 22nd, beginning at 11 a.m. To ensure the health and safety of our community, we are following all guidelines set by local, state and CDC officials. If you are planning on attending a service, please contact the funeral home in advance, so that we can plan accordingly.

The family of Shiu Chang Chu created this Life Tributes page to make it easy to share your memories.

Send flowers to the Chu family.