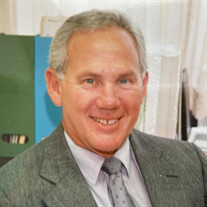 Shelton Ehrlich, age 86, of Saratoga, California passed away on Aug. 22, 2020. He is survived by his loving wife of 58 years, Sandra Ehrlich (Silver); his much loved family -- daughter Susan, son Steven, daughter-in-law Yumiko and grandson, Tyler. He is fondly remembered by sister-in-law Rita Dahut, brother-in-law Irwin Shanes, many cousins, and dear friends. "The Unc" is lovingly remembered for all the happy times and adventures by nieces and nephews Cindy and Mark Bobrow, Ellen Schweiger, Jeffrey and Jacki Shanes and Nancy Shanes; and by grandnieces and grandnephews Elizabeth and Josh Hipsman , Justin Schweiger, Matthew Shanes, Jenny Bobrow , Andrew Shanes, Robbie Dahut and Caitlyn Dahut; and great grandnephew Ethan Hipsman. Shelly was born in St. Louis, Missouri on July 21, 1934 to Russian immigrant parents Rose and Sam. He attended the University of Missouri-Columbia from 1953-1957 where he was a member of Alpha Epsilon Pi Fraternity and received a Bachelor of Science Degree in Mechanical Engineering. He served as a Lieutenant JG in the U.S. Navy. Shelly met his future bride at a Young College Graduates Club party in New York City. He married Sandy on July 4, 1962 in New York City, and then they drove cross country to California, where he attended the University of California, Berkeley and received a master’s degree in Nuclear Engineering. Their life together led them to many adventures from coast to coast, and world travels where he spoke as an expert on clean coal energy. They raised their family and lived in Palo Alto for more than 40 years. In the past 4 years, Shelly and Sandy enjoyed their new home in Saratoga Retirement Community, where he was involved in the investment and hiking clubs and socialized with wonderful new friends. Some of his happiest recent adventures were with grandson Tyler zip lining through Mexican jungles, and dog sledding on an Alaskan glacier last summer. Shelly loved life and showed everyone how best to live it. Donations in Shelly’s memory can be made to The Legacy Fund at Saratoga Retirement Community, 14500 Fruitvale Ave, Saratoga, CA 95070 or Magen David Adom, afmda.org A private family burial is planned for the morning of Wednesday, August 26th, 2020.

The family of Shelton Ehrlich created this Life Tributes page to make it easy to share your memories.

Send flowers to the Ehrlich family.