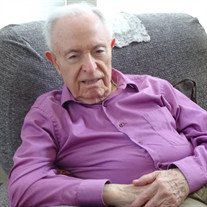 Dr. Sami Jabra Obeid left this world on April 9, 2022 at 2:30 pm at his home in Fremont, California. Born on August 11, 1924 in Beirut Lebanon, he was the son of Dr. Jabra Antonius Obeid (born in Mishtayeh, Syria in 1895) and Marie George Farra (born in Tripoli, Lebanon in 1902) Dr. Obeid attended the International College in Beirut, Lebanon and graduated from the American University of Beirut School of Medicine with distinction in 1951. He did a residency program at Columbia Medical Center in New York City from 1954 to 1957 when he returned to Lebanon. He was a brilliant physician and surgeon and professor and mentor to generations of medical students. Dr. Obeid was respected and admired by all his patients, students, associates and members of his extended family and touched the lives of countless people. He enjoyed classical music, poetry and solving crossword puzzles. Those who passed away before him included his parents, his only sibling sister Mouna (Obeid) Haddad and her husband Ibrahim Sami Haddad and his beloved daughter Dr. Lina Marie Obeid. Dr. Obeid is survived by his loving wife of 71 years Rosette Jiryis (Zacharia) three sons: Kamal and his wife Rosemary (Iliya), Ramzi and Jihad and his wife Eileen (McKeon) and his son-in-law Dr. Yusuf Awni Hannun. He is also survived by seven grandchildren Mona and husband Janmeja Heir and Sammy Obeid, Reem and husband Khaled Moussawi, Awni and wife Kathy (Cooper). and Marya Hannun and Paul and Nora Obeid and five great grandchildren: Elika Heir, Evelyn and Yusuf Hannun and Lina and Joud Moussawi. Also surviving him are his nephew Nadim Haddad and nieces Lamia and Samar Haddad and several cousins. Services will be held at Skylawn Funeral Home and Memorial Park, San Mateo, California at 10:30 am on Tuesday, April 19th. Instead of sending flowers, the family is asking for contributions to St. James Orthodox Church in Milpitas, California.

Dr. Sami Jabra Obeid left this world on April 9, 2022 at 2:30 pm at his home in Fremont, California. Born on August 11, 1924 in Beirut Lebanon, he was the son of Dr. Jabra Antonius Obeid (born in Mishtayeh, Syria in 1895) and Marie George Farra... View Obituary & Service Information

The family of Dr. Sami Jabra Obeid created this Life Tributes page to make it easy to share your memories.

Send flowers to the Obeid family.