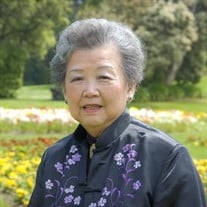 After living 100 years and 2 months, Rose Chin Swan Sio Chen went peacefully to heaven on March 30, 2021 in Millbrae, CA. Rose was born and raised in Burma and immigrated to the United States in 1971, ultimately settling in California to... View Obituary & Service Information

The family of Rose Sio-Chen created this Life Tributes page to make it easy to share your memories.

Send flowers to the Sio-Chen family.