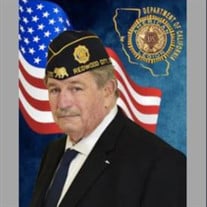 Romie Eugene Bassetto July 8, 1947 - April 14, 2022 Romie Bassetto was born on July 8, 1947 to Lawrence (Louis) Bassetto and Yolanda (Signorini) Bassetto. Louis was born in Horn, Switzerland in 1912 and moved to the United Stated when he was 18. Yolanda was born in Florence, Italy in 1920 and moved to San Francisco when she was 4. Yolanda and Louis met in Chicago where he worked at Republic Steel Corporation. They married in San Francisco in 1941 at Saint Peter and Paul’s Church in North Beach. Romie was the second of four sons, Lawrence, Romie, John and James, spaced five years apart. Yolanda claimed that the doctor should have installed a zipper instead of four cesarean births. The family moved from San Francisco to Farm Hills, Redwood City in 1957 when Romie was 10. Romie loved animals, especially horses, and hung around Olsen Nolte Saddle Shop as a kid. He was introduced to Joe Greer who became his second dad. Romie helped on Joe’s farm in Woodside, working with all kinds of animals and equipment. Romie played the tuba through his elementary school days through high school where he graduated from Serra. He had established a non-stop work ethic early on, working in dad’s San Francisco grocery store to helping with the family catering business. At age 18, he joined the army and found himself in the thick of the Vietnam War. He served as a Convoy Escort and Battalion Commander’s Aide and Gun Jeep Driver. Discharged honorably from the Oakland Army Base, Spec 4 Bassetto was “dismissed,” unceremoniously, at 3:30 am in the morning. Romie worked as Sequoia Union High School Transportation Director for 25 years and ran the first California state certified school bus driving instructor course that was collaborated with the Highway Patrol. He ran his own business, Show Ring Productions for decades. He owned Bud, Bob, Bonnie and Clyde, Percheron Draft horses that he drove to plow fields, or drive his many show wagons and Santa Arrival sleigh. He also won many competitions in driving six horse teams. They also had a wheeled train to the delight of children in many local street fairs. In 1981, Romie joined the American Legion Post 105 in Redwood City. With many years as the the post’s commander and thousands of dedicated hours to serve his fellow comrades and community, he was acknowledged by CA State Senator, Jerry Hill on October 27, 2016, as Veteran of the Year for California’s 13th Senate District. In 2015 he and (Col) Leo McArdle co-chaired the Avenue of Flags subcommittee, which hosted the traveling replica of the Vietnam Veterans Memorial in Washington, The Wall that Heals- at Golden Gate National Cemetery in San Bruno. Romie worked tirelessly to establish a new 8 story building project to replace the old Post 105 building for the last five years. Without Romie’s input, it would never have happened and hopes to break ground very soon. Romie and Barbara married in 1971 and had one daughter, Shana. Romie is grandfather to Shana’s three children, Michael, Kaitlyn and Maci. Lawrence, the first born to Louis and Yolanda passed away four years ago leaving his dear wife, Mua. John, third born and his wife Norine have always helped on Romie’s projects. James, last born lives in the Reno area. Romie touched so many lives, it is hard to recall them all, but he definitely left an impact on the world and will be missed dearly. In lieu of flowers please consider a donation of a brand-new Mickey Mouse to a children’s hospital in remembrance of Romie Bassetto. Or, a donation to American Legions Post 105 in Redwood City towards the new American Legion post building project. Please visit the link below to read more about Romie's life: https://www.bartlettbiographies.com/_files/ugd/5ea9c3_4a3331bf5bdf4d99873357c5bcb6130a.pdf

Romie Eugene Bassetto July 8, 1947 - April 14, 2022 Romie Bassetto was born on July 8, 1947 to Lawrence (Louis) Bassetto and Yolanda (Signorini) Bassetto. Louis was born in Horn, Switzerland in 1912 and moved to the United Stated when he was... View Obituary & Service Information

The family of Romie Bassetto created this Life Tributes page to make it easy to share your memories.

Send flowers to the Bassetto family.