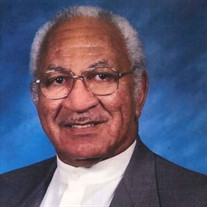 Robert Lee “Red” Wiseman was called home to be with our Lord and Savior on Monday, May 4, 2020. Our beloved son, brother, father, grandfather, great-grandfather, uncle, cousin, friend, usher, Mason and hard worker, cherished each moment he was blessed to participate in his earthly journey. E.D. and Leona (nee Davis) Wiseman were married December 29, 1928. Robert was born to this union on December 4, 1938/9 in El Dorado, Arkansas. At the age of four, the family relocated to San Francisco, California. He accepted Christ at an early age. He was a member of Second Union Baptist Church during his formative years. As an adult, he joined Mt. Zion Baptist Church, both of which were in San Francisco. In 2006, Robert joined Progressive Missionary Baptist Church in Modesto, California. As a lifelong usher, he assisted each churches’ usher boards with uniforms, hand manuals and provided guidance to the Youth, Adult and Senior Usher Boards. Robert attended the City and County of San Francisco Unified School District academic institutions, which included Irving M. Scott Elementary School, Horace Mann, Jr. Middle School and Mission High School. He was a standout high school basketball player. Although he never obtained a degree from a higher learning institution, he always sought to gain knowledge, wisdom and understanding. He took classes at City College of San Francisco, was a self-proclaimed “picture reader” and indulged in conversations with people from various backgrounds to learn about human behavior and relationships. Robert Lee Wiseman was an active Mason and member of the Kunta Kinte Lodge #89 for many, many years. Robert was a dutiful employee and quite popular driver with the San Francisco Municipal Railway (MUNI). He drove nearly every line and built many relationships. He worked out of the Green and Potrero Divisions for much of his career. Robert retired in 1999, after 38 years of service to the City and County of San Francisco. Following retirement, Red relocated to Modesto, California, after purchasing his home, to fully enjoy what he referred to as his “twelve on and twelve off” (retirement). As Robert enjoyed his leisure time, he spent it with his canine companions, Brownie, Denver and Hook. However, Denver would take occasional five day “excursions.” Robert’s life was well lived. He enjoyed driving, traveling, socializing and learning, but above all he enjoyed a good meal and engaging conversation. Robert absolutely LOVED watermelon, good soul food and was a good cook. His sweet potato pie and hot-water cornbread were to be reckoned with. In his later years, he discovered Golden Corral and would drive to locations in multiple counties to “taste test” and mess with his favorite servers. Robert was known for lending a helping hand and ready to stand in the gap. When anyone needed a second hand, he was already present. When family and friends suffered losses, he was there. If he was not there physically, he was there over the telephone, via letter or materially. Above all else, Robert Lee “Red” Wiseman loved learning. He read various self-help books, followed different televised ministries, and gleaned what he could to “improve self.” Robert Lee Wiseman was often thought of as a maverick. He lived life as he chose. He enjoyed traveling, eating, driving and photography. He was exceptionally fond of learning and gaining understanding of life and the human condition. Robert was blessed with ten children. Although he was unable to participate in their lives, as he envisioned, he loved each of them: Dettranay Wiseman-Calloway, Kimberle Wiseman, Dorinda Wiseman, Robert “Bobby” Wiseman, Jr., Kristopher Wiseman, Natalie Keel, Hope Williams, Andrew “Drew” Williams, Joshua Williams, and Emmanuel Wiseman. Robert Lee has 14 grandchildren and 2 great-grandchildren. Robert was preceded in death by his parents E.D. and Leona Wiseman, older siblings Mable Rea Wiseman, MayDelle Crisp, Clarence and Mildred Wiseman. He leaves behind two brothers, General Grant Wiseman and Oscar D. Wiseman of San Francisco, California and one sister, Ninevah Williams of Antioch, California. He leaves a host of nephews, nieces, cousins and friends. In lieu of flowers, please make a donation to your local Alzheimer’s Association, an African American Senior Service Agency,or USC Hartford Center of Excellence in Geriatric Social Work with specific attention to the Advocates for African American Elders (AAAE), within the Edward R. Roybal Institute on Aging. For the Inurnment service on Friday March 29, 2020 it will be viewable on Zoom starting at 2:00pm Here is the link and password for the service on Zoom https://viewneral.zoom.us/j/91844968627?pwd=ekRWWVk2ZlFCanRDSkorTXp3NitOdz09 Password: 199524

The family of Robert Lee Wiseman created this Life Tributes page to make it easy to share your memories.

Robert Lee “Red” Wiseman was called home to be with our Lord...

Send flowers to the Wiseman family.