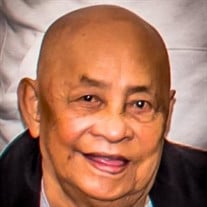 Robert was born in Santiago, Ilocos Sur, Philippines. Robert was preceded in death by his father, Juan Ilumin, Sr. and mother, Victorina Ilumin, his siblings: Elly, Juan, Jr., and Norma. Robert is survived by his wife, Nilda M. Ilumin (nee Mangilaya), Daisy (Broyles), Leah (Wahlberg), Nilbert Ilumin and Laarni (Ponce). His loving grandkids, Railan I. Broyles (37), Xavier I. Ponce (25), Sabrina Ilumin(22), Kailani I. Morelos(21), Nolan Ilumin(19)and Erika I. Wahlberg(20). He attended Dagupan Orient High School in Dagupan City, Pangasinan. He received his Bachelors of Science degree in Dentistry from Manila Central University. In his youth and throughout his lifetime, Robert appreciated, loved and admired the sweet science of boxing. He not only enjoyed watching a good round of boxing, but it has been known that he also “participated” in the art of pugilism as well as other art form of hand-to-hand combat (MMA, etc.). In 1959 his family moved to Quezon City where he wooed and courted a young lady by the name of Nilda, a neighbor who lived right above them. They eventually fell in love and married in 1961 and went on to have four children of their own. He immigrated to the United States in February 1970. He arrived in Chicago where he was able to secure employment. Unfortunately, the freezing temperature of the Windy City was not conducive to a man whose life was spent living on a tropical island and soon moved to sunny California. He first lived with an uncle and his family in Daly City and then went on to reside in San Francisco. His wife arrived later that year and was pregnant with their last child when his three other children arrived in late 1971. Robert worked many jobs from a school bus driver to working as a butcher at a meat packing company. During all these various jobs and in various positions, he never took his focus away from his goal – his sole support for his family. Simply put, Robert provided without selfishness or greed. Robert finally found employment where he actually enjoyed his job and the people and after serving 20+ years, he retired from the San Francisco Muni Railways. Robert was respected by many and was a great advisor to all who seek his counsel. Robert was good with his hands – he was a professional handy-man as evidenced by the many tools and machinery he had collected over the years. Robert was also an amazing cook and had a refine palate much like an Asian cuisine chef. He spoke many dialects of the Philippines and able to exchange colorful curse words to which his children listened in awe and learned with great enthusiasm. He was a remarkable storyteller who could narrate a story or a joke with theatrics and embellishment and everyone would listen with great anticipation. He could practically recite the phonebook and continue to hold a captive audience – he was that good. Robert also loved pets – they gravitated towards him like a magnet. Robert was a loving husband, father, grandfather, godfather and friends to many near and far. Although Robert has come to his journey’s end, we all believe that we shall see each other again. There is no one else in the world I’d rather have as my guardian angel, my protector, my keeper than Robert Sipin Ilumin for I know, he will fight for me, guard me and protect me. May you rest in peace forever and ever.

The family of Robert S. Ilumin created this Life Tributes page to make it easy to share your memories.

Send flowers to the Ilumin family.