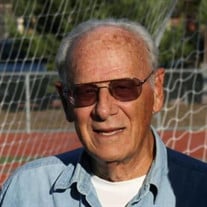 Cruzen October 17, 1930 – December 28, 2020 Sunnyvale – Robert Golay Cruzen, 90, of Sunnyvale, California, passed peacefully at home on December 28, 2020. Bob was born on October 17, 1930 to Golay and Ruth (Scotton) Cruzen in Los Angeles. He married his wife Carol (Walker) Cruzen August 20, 1955, sharing 65 years together. Bob had many interests and led a full and active life. As a child, summers in Balboa fostered a lifelong love of the beach and swimming. Later, Bob was a fixture at the neighborhood swimming pool, the Laurelwood Cabana Club for over 50 years. He was involved in the swim team, a founding board member of the Junipero Serra Swim League and made many, many friends “at the pool”. In high school he played trumpet and twice marched in the Rose Parade with the Alhambra High School Marching Band. He enjoyed a variety of different types of music throughout his life. He studied two years at Pasadena City College before enlisting in the Air National Guard where he was stationed two years in Wiesbaden, Germany. Bob made the most of his time in Europe, learning to ski in the Alps and traveling at every opportunity. On his return, he continued his education at San Jose State where he was a member of Theta Chi Fraternity and earned a degree in Business. He and Carol decided to make the Santa Clara Valley their permanent home when he joined the Marine Division of Westinghouse in Sunnyvale working in the industry for 37 years, over 30 years with Westinghouse. He was a member of the Society of Port Engineers of San Francisco. From a young age, Bob loved the outdoors, camping, backpacking, fishing and hiking. A Boy Scout in his youth, he volunteered as an adult and was involved with his son Rich’s troop. Family trips to the Sierras were common, camping and backpacking in the summers, skiing in the winters. Although never a pilot, he was an aviation enthusiast and enjoyed traveling to air shows and visiting air museums. Later, Bob and Carol enjoyed dancing in a square dance club for over 20 years. Friends will remember Bob for his good nature, friendliness, and enthusiasm. He is survived by his wife Carol, his daughter Lyn (Rob) Lavery of Windsor, and son Rich (Gina) Cruzen, of Fremont, grandsons Tyler, Mitchell, Lee and Aiden. He is preceded in death by his parents and twin brother Fred. A private family inurnment was held due to the current COVID-19 restrictions.

The family of Robert Golay Cruzen created this Life Tributes page to make it easy to share your memories.

Send flowers to the Cruzen family.