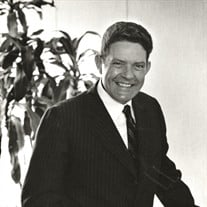 On June 17, 2021, Richard K. (Dick) Hoffman, of San Mateo, CA, loving and beloved father of three children, passed away at the age of 92. Dick was born November 21,1928 to Paul and Matilda (Fultz) Hoffman. Proud to have been south-side of Chicago born and raised, Dick graduated Calumet High School and served in Korea for the US Army before earning a law degree with highest honors from Chicago-Kent College of Law in 1953. He practiced law shortly before accepting a position with USF&G, thus beginning a 40 year career as a financial, surety and risk subject matter expert advisor and lender to the construction industry. It was at USF&G that he met and married his wife Lola Ann (Schofield) Hoffman in February 1956. They shared their lives and raised a family together with two sons (Paul and David) and a daughter (Ellen), first in the Chicago, IL area, later in Baltimore, MD, before finally settling in the Bay Area in the late 1960’s. It was then that Dick left the surety industry and spent virtually the rest of his career with Bank of America, where he held numerous positions in the US and Asia, eventually leading the bank’s global construction lending activity. A man who could easily have been a builder himself, Dick respected the men and women in the construction industry whom he served, forming deep, lifelong friendships there. A member of the “April Club”, a Northern California contractor community organization. He was honored to receive the Service and Supply Award in 1984 from “The Beavers” Heavy Engineering Construction Association. Dick was a great animal lover. He was a man of many talents and hobbies, He loved classical music. He was a self-taught piano and guitar player, dabbled with a bagpipe chanter, and sang in a beautiful baritone voice. Dick raised and maintained a Japanese bonsai garden for almost 50 years. He was gifted with his hands and at working on anything mechanical, owning and operating small-engine aircraft, motorcycles, and sports cars over the years. He was a lifelong master model builder, particularly of model railroads, building room-filling “O Gauge” layouts, constructing dozens of buildings, rail cars and hundreds of feet of track. Upon retirement Dick exchanged his coat and tie for an apron, converted his garage to a machine shop and constructed two 1:8 scale “live steam” locomotives and tenders, reminiscent of those he would have seen as a boy growing up near Chicago’s famous rail yards of the 1930’s. Mostly soft-spoken and uncomfortable drawing attention to himself, Dick was a gentle man, had a keen intellect, a quick sense of humor, was formidably competent, and was a true and loyal friend. His greatest role, however, was as a loving husband and devoted father. After Lola passed in 1978, Dick never remarried, proclaiming he’d married once, for life. He was a dedicated and loving father who cherished his children—and they adored him. His long, interesting, and love-filled life was a pleasure to be a part of by all whose lives he touched. Dick is predeceased by his parents, Paul and Matilda, his beloved wife Lola, brother Paul, sister Marian and by many cats who he loved and cherished. He is survived by his sons Paul Hoffman (Janet Chow) and David Hoffman, and his daughter Ellen Hoffman (Joern Schwamb). Dick considered and loved his “in-law” children as his own, and is also survived by many nieces, nephews and grandnieces and grandnephews. A private internment service for family and friends will be held at Skylawn Memorial Park, San Mateo, CA at 12:30 PM on Mon June 28, 2021. The family requests that in lieu of flowers, donations in the name of Dick Hoffman be made to the Beavers Charitable Trust. (https://www.thebeavers.org/pledge-form/) or to The Peninsula Humane Society ( https://www.phs-spca.org/donate/ )

On June 17, 2021, Richard K. (Dick) Hoffman, of San Mateo, CA, loving and beloved father of three children, passed away at the age of 92. Dick was born November 21,1928 to Paul and Matilda (Fultz) Hoffman. Proud to have been south-side of... View Obituary & Service Information

The family of Richard K. Hoffman created this Life Tributes page to make it easy to share your memories.

Send flowers to the Hoffman family.