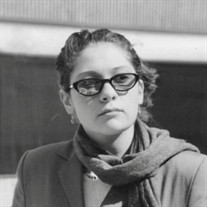 Reyna Luisa Mejia, a Native of South San Francisco, died peacefully in her father’s arms on August 14th. She had just celebrated her 40th birthday on June 10th. She is preceded in death by her mother, Deborah Jones, and her beloved grandmother, Alberta Jones. She is survived by her loving father, Manuel Mejia (Irma) of San Francisco, brother Manuel Mejia (Laura) of Sacramento, brother Francisco Mejia of South San Francisco, sister Jessica Jones of Palo Alto, and sister Melina Mejia Stock (Michael) of Chesterton, Indiana. She also leaves behind a niece, Cati, and nephews Mateo, and John. Reyna was a gifted singer, which was recognized at an early age when she performed a powerful rendition of Part of Your World (The Little Mermaid) at a school talent show. She was subsequently given a scholarship to attend adult-level voice lessons at College of San Mateo, which she enjoyed and benefited from. She attended school at Sunshine Gardens Elementary School, Parkway Heights Middle School, and graduated in 1998 from El Camino High School in South San Francisco. Reyna was a camper, CIT, and Ropes Course leader at CYO Summer Camp in Occidental, CA between 1996-2000. She thrived in the beautiful natural environment, made many friends, and was touched by the healing guidance of the many mentors there. Her experience working on the Ropes Course led to an enduring passion for climbing (rocks and trees!). In the Spring of 2001, she took a 30-day trip with her little sister, Melina, to Europe, where they rode the train system throughout Germany, Austria, the Czech Republic, and Spain. The finished their trip in Ireland, where Reyna found a sense of peace and wonderment at the Cliffs of Moher. It was a once-in-a-lifetime trip that left her with many wonderful memories. Anyone who knew Reyna recognized her big-heartedness, even in her later years when the pain of her childhood trauma and lifelong battle with addiction overcame her. Nothing overshadows the bright, loving soul at her core, and her family believes she has been released from her suffering and restored into a peaceful state of eternity. She was adored by many, and she will be deeply missed. In accordance to her wishes, she will be laid to rest at Skylawn Memorial Park in San Mateo, CA on Tuesday, August 25th. She personally chose this location for the breathtaking views and belief that she will spend the afterlife happily climbing the many spectacular trees. There will be a viewing prior to services at 10am, and her interment will follow at 11am.

Reyna Luisa Mejia, a Native of South San Francisco, died peacefully in her father&#8217;s arms on August 14th. She had just celebrated her 40th birthday on June 10th. She is preceded in death by her mother, Deborah Jones, and her beloved grandmother,... View Obituary & Service Information

The family of Reyna L. Mejia created this Life Tributes page to make it easy to share your memories.

Send flowers to the Mejia family.