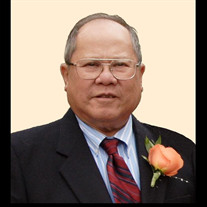 Our beloved father/grandfather, Quang Trieu Duong passed away peacefully on June 30th, 2021 in California at the age of 89. Quang was born in Guangdong, China, to Cư Dương and Bê Thị Nguyễn on March 15th,1932. Quang lost his father at the tender age of four. Due to financial hardships at the time, his mother, Be, sent him to live with his Second Uncle, Aunt, and paternal Grandmother. His Second Uncle and Aunt loved him dearly and treated him like their own son. Quang worked hard at his uncle’s business ventures, and earned a chance to further develop himself. His uncle and aunt sent him to a university in Vietnam, where he studied Entrepreneurship and French. While studying at university, at the age of 21, he was introduced to his one true love, Muoi, whom he ended up marrying in 1956. With the financial and emotional support of his Second Uncle and Muoi’s parents, they opened a very successful hardware store. Through the years, they had 11 children (7 sons and 4 daughters). The Duongs were rather wealthy in the community and lived a fabulous life for their times. Quang spoiled his children with every chance he had. His children knew their mother would always say no, so they would always go to their father for any treats or expensive purchases. Being a successful business owner and father, he was able to support his mother, Be, elder sister, Ky, and her children. In addition to his own family, he supported over 15 employees, all of whom addressed him as Uncle. Quang loved traveling with his family and often held large gatherings during dinner in the courtyard of their home for family and friends. As the war in Vietnam progressed, he knew he had to work hard to find ways to protect his family. In 1977, he started sending his children to America to protect them. He first sent his 3 eldest sons, Frank, Jeff, and Wayne. Followed by his 6 other children, Jenny, Jim, Raymond, Brandon, Ann and Eric, in 1980. Finally, in 1981 he managed to escape with his wife Muoi, their youngest daughter June, niece Lynda, eldest daughter Connie, her husband and his two grandchildren, Sherry and Victor. Quang single handedly ensured the safety of all of his children and grandchildren while in search of a better life in America. He knew that life was not going to be glamorous; however over the next 40 years, he was a hard worker and was respected by many for his integrity and kindness. Raised from humble beginnings, he lived a life of prosperity with strength and honor. He paved the way for his family and left behind a legacy for many to admire and aspire to. Quang is preceded in death by his wife Muoi To La. He is survived by his children, Connie Chan, Jenny Ly and her spouse, Sen, Franklin Young and his spouse, Virginia, Wayne Young and his spouse, Julie, Jeff Designs, Jim Young and his spouse, Lynn, Raymond Young and his spouse, Crystal, Brandon Young and his spouse, Wendy, Ann Young and her spouse, Robert, Eric Young and his spouse, Gigi, and June Kempner and her spouse, Leon. He is also survived by his grandchildren, Sherry Chan and her spouse, Kevin, Victor Chan and his spouse, Pooja, Kevin Ly and his spouse, Jia, Evan Ly and his spouse, Hope, Matthew Young and his spouse, Lily, David Young, Alex Young and his spouse, Jessica, Albert Young, Stephanie Ly, Steven Ly, Bryan Young, Roger Ly, Ivan Young, Richard Young, Lauren Young, Skye Kempner, Quinmann Young, Tess Kempner, Bella Young, Quince Young, Callista Young, and Sydney Ly. He is also survived by his great grand-daughters, Angelina Cheung and Juliana Cheung. Viewing and Buddhist Prayer Services Saturday, July 10th from 1PM- 5PM Pacific Chapel, Skylawn Memorial Park, San Mateo Memorial and Burial Service Sunday, July 11th at 9:00 AM - 11:00 AM Pacific Chapel, Skylawn Memorial Park, San Mateo Reception Service Sunday, July 11th at 11AM-2PM Vista Room, Skylawn Memorial Park, San Mateo

The family of Quang T. Duong created this Life Tributes page to make it easy to share your memories.

Send flowers to the Duong family.