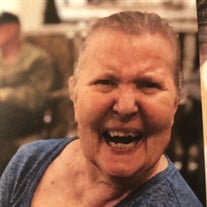 Peggy Jo Weaver Gundunas, age 88 years old, passed peacefully at Carlton Plaza in Elk Grove, CA on November 23rd at 11:00pm. Peggy Jo was born June 14th, 1932, in Tecumseh, Oklahoma to William Preston Weaver and Opal Mae Van Winkle Weaver. A massive drought brought the Dust Bowl and work became scarce. With the news of plentiful jobs and opportunities in California, they made the long drive, stopping along the way to work in labor camps, picking cotton and grapes. At these labor camps, multiple families lived in tents, separated by a sheet her mother hung for privacy. The family arrived in Emeryville, California and her parents found work in the shipyards during World War II. Peggy Jo graduated high school as Valedictorian. The family then moved to Fresno, California, where they lived in a boxcar while her dad started working for the railroad. Shortly after arriving in Fresno, Peggy Jo began nursing school. She dreamt of becoming an Air Force flight nurse, but a blind date, set up through mutual friends, changed her plans. She met Louie Peter Gundunas and they began a courtship of dancing, dining, and laughter. They were married on November 24th, 1955. During their 59 years of marriage, Peggy Jo took on many roles highlighting her entrepreneurial spirit and boundless energy. As a Registered Nurse, she worked at several hospitals in multiple capacities specializing in Pediatrics and Labor and Delivery. Her nursing led her to China for a two week professional development, an experience Peggy Jo regarded as a pivotal turning point in her life. Throughout, Peggy Jo also owned several restaurants, raised four children, became a proud Nana to six grandchildren, and had careers in sales and real estate as well. Peggy Jo was a force to be reckoned with. She was fiercely independent and she never wavered from her values. She was eternally optimistic, bringing light and grace to every situation she faced. Her infectious smile could light up an entire room and she offered compassion to each person she met. She was the ultimate caregiver and role model. As a lifelong learner, she was an advocate for nutrition and fitness. Peggy Jo is survived by four children, six grandchildren, and two great-grandchildren. - Kristina Gundunas-Smith and Spouse Scott Smith - Korrina Smith and Spouse Justin Landes - Serrina Smith and Spouse Alex Kalinkin - Zena Smith - Tanner Smith and Fiance Joy Muniz - Rebekah Victoria Gundunas - Rachel Gundunas Rettig and Spouse Taylor Rettig - Pierce Rettig - Peter Lewis Gundunas and Spouse Rebecca Gundunas - Susan Gundunas and Spouse Paul - Nathan Avery - Matthew Avery A funeral service will be held virtually via Zoom on Tuesday, December 1st, at 12:00pm at Skylawn Memorial in San Mateo, Ca.

The family of Peggy Jo Weaver Gundunas created this Life Tributes page to make it easy to share your memories.