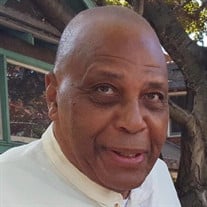 Overlin Emerson Mack went home to be with the Lord on November 12th2020, at his home in Oakland CA. Overlin was born in 1935 rural SE Texas, in the city of Linden. He was raised by his mother Mrs. Theodora Stanley and his grandfather, Mr. Zachariah Stanley. Overlin left Linden and joined the Merchant Marines at a tender age. He became acquainted with the world outside of the humble beginnings which saw him close to nature, a quality which he retained throughout life. He loved both the city, and the woods. Overlin eventually came to California during its golden era of music, peace and love. He was a line operator at CALA pet foods in Oakland, CA, a counselor at the former California school for the deaf, and a MUNI operator for some 25+ years. He fondly recalled his role in Laney College’s production of “Little Ham,” amongst so many other fond memories of life. Overlin loved California which supported his free spirit and lived there for the rest of his life. He loved the beauty of the land in Pt. Reyes, CA, and all the action at Cache Creek. Overlin had a big heart and did things for people in secret, things which uplifted others and which no-one was aware of. He tried to be fair to others and would want those who loved him to carry on with their lives. “Live your life,” was his advice to the youth. “Try to have something for yourself, and find someone good to build a life with,” was the essence of his wisdom to those who came after him. He loved fast cars, good food, and sports and believed in carrying on with as much grace as one can despite both victories and hardships. He loved God, and his fellow man and he was loved by many. Overlin Mack is survived by his five children: Overlin Mack Jr., Jerome Mack, Sonja Mack, Jonathan Mack, and Zackery Mack-Westrom. His grandchildren: Marcello Mack, Mikaela Mack, McKenzie Mack, Ziona Mack, Michalia’ Banks, Shoshana Mack-Westrom. Overlin loved us all in the best way he knew how to. We will uphold his memory with honor and integrity. Rest in Peace Overlin Emerson Mack (6/7/1935-11/12/2020) Acknowledgment and Appreciation: Mrs. Mui T. Hy, through her great kindness provided for Overlin’s burial plot, testament to the long reach of her compassion. His final wishes were to be laid to rest next to her.

Overlin Emerson Mack went home to be with the Lord on November 12th2020, at his home in Oakland CA. Overlin was born in 1935 rural SE Texas, in the city of Linden. He was raised by his mother Mrs. Theodora Stanley and his grandfather, Mr. Zachariah... View Obituary & Service Information

The family of Overlin Emerson Mack created this Life Tributes page to make it easy to share your memories.

Overlin Emerson Mack went home to be with the Lord on November...

Send flowers to the Mack family.