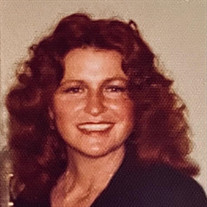 Nina Katherine Burke passed away peacefully in her sleep from natural causes on Monday December 27, 2021. She was 82 years young. Nina was born a fiery Leo red head on August 18th 1939 in San Francisco, CA, the second of five children, to Alberta Angel Lendewig (Pace) of Missouri and Emil “Eddie” Lendewig of San Francisco. Nina and her four siblings were reared in the Portola District where her parents were deeply in love and had a ranch of horses, cows, pigs and chickens. This period encapsulated her fondest childhood memories. Nina was very close with her father who was a former lifeguard at Fleishacker Pool - swimming along side Johnny Weissmuller. This famous “Worlds Largest Outdoor Pool” was so vast, Eddie would have to patrol it in a rowboat. He was also a middle weight professional boxer who was managed by his father Thelo – He taught Nina to box at a young age and she continued to be fighter her entire life. Nina’s family were all Union people & her father a Union leader - fighting for the rights of the Longshoreman where he worked on the docks before his untimely death from cancer when she was only 12 years old. Sadly her entire family would be separated soon thereafter. Ultimately Nina was placed at the Convent of the Good Shepard, boarding school for “troubled girls”. Nina found happiness there and was particularly close to Sister Monica who helped her leave the convent for a loving foster home. She was forever grateful for their world class education, religious guidance and care along with the love she received from her last foster family, The Dowlings who were from Ireland. Mr. (Captain) Dowling was a Fire-chief for the SFFD. Nina graduated from Presentation High School in San Francisco in1958. She would meet her first husband and father to their children at an Irish dance while living with them. Nina was employed by the Lumber Industry Union (now Teamsters) of San Francisco as a claims adjuster in San Francisco. It was her favorite career moment & she made lifelong friends there. After five not so blissful years of marriage, where she reveled in being a mother to her daughter Bridget and son Sean, Nina divorced & re-married in a spectacular traditional Chinese ceremony in Chinatown and moved down the peninsula to Belmont in 1972. The 1970’s feminist movement encouraged women like her to rethink traditional roles as homemakers and to seek a higher education. Nina divorced, became a single mother and enrolled at the College of San Mateo’s Re-entry Program that helped such women navigate college and plan their next steps. Upon graduation Nina worked as an event planner for Canterbury of New Zealand - World Outfitters of Rugby Wear and as an Executive Secretary and at The Stanford Research Institute (SRI) where she had a top security clearance working with nuclear weapon research and development. All of this was in addition to being a totally engaged full time single mom, always encouraging and getting involved with things like being a girl scout leader, class mom, a devoted fan at countless baseball and soccer games that Sean excelled in & a talented seamstress in creating her own wardrobe and costumes for her daughter to wear in numerous theatrical productions - just to name a few. Nina moved from the Bay Area to her treasured Gold Country to the town of Sonora (California....not Mexico) ) in 1990’s where she relished in its history, majestic views of waterfalls on her property and all its Northern California beauty. Nina was a proud third generation San Franciscan who loved her city by the bay that embodied the colorful and free-spirited woman she was. Nina was a deeply spiritual woman, an avid learner & reader - devouring John Steinbeck, Edgar Caycee & Sylvia Brown. Her favorite books were The Prophet & The Two Marys - The Hidden History of the Mother and Wife of Jesus. Her favorite celebrity obsession was Marilyn Monroe and her favorite saint to pray to was Blessed Mother. Nina lived with great passion. She loved to throw legendary parties, dance, grow roses, orchids and begonias, collect antiques, spend time doting on her Doberman Dillinger and her Dalmatian Champ and laughing with her many friends. Nina’s kindness, unlimited generosity, sense of humor and epic life stories will be greatly missed by all that knew her. She spent or gave away every cent she ever had on anything she felt was worthy with no regrets and left nothing on the table. Ninas favorite phrase which became her life mantra - “Freedom’s just another word for nothing left to lose.” Nina is predeceased by her beloved siblings, Eddie, Tommy and Elsie Marie Lendewig.. Nina is survived by her loved sister Jerrie Ann Shulenberg and her husband Bradley, her children Bridget Burke Weiss and her husband Micah, her son Sean Burke and her Grandchildren Christine and Michael Rowland along with her beloved nieces & nephews and their many beautiful children. Family and friends are invited to attend the funeral and celebration of her life on Saturday January 15, 1 p.m. at Skylawn Memorial Cemetery in San Mateo, California. An outdoor luncheon in Half Moon Bay immediately to follow. In lieu of flowers donations can be made in her name to Roots and Wings, a not for profit who provide safe housing, emotional support, life skills, and educational opportunities for youth aging out of foster care; empowering them to rise toward their greatest potential.

Nina Katherine Burke passed away peacefully in her sleep from natural causes on Monday December 27, 2021. She was 82 years young. Nina was born a fiery Leo red head on August 18th 1939 in San Francisco, CA, the second of five children, to Alberta... View Obituary & Service Information

The family of Nina K. Burke created this Life Tributes page to make it easy to share your memories.

Nina Katherine Burke passed away peacefully in her sleep from...

Send flowers to the Burke family.