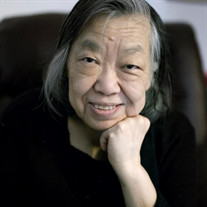 Jean Hsiang-Hsu (1944 – 2020) Age 76 San Francisco For my mother, Jean Hsiang-Hsu, life as an immigrant and American citizen wasn’t just a story of success, it was a story of struggle and survival. However, the legacy that she has left would greatly suggest that she lived life to the fullest as an American and an immigrant who fulfilled her dreams. Born in the Zhejiang Province of Mainland China in 1944, her parents Chin-hu and Kwan-chuu Hsiang fled China during the Chinese Civil War to seek refuge in Taiwan where she spent most of her childhood years. There she grew up with her 3 brothers and younger sister together in Taipei, eventually attending the Providence University in Taichung, Taiwan and graduating with a Bachelors in English Literature. Throughout her college years, Jean set her own trends, listening to Chinese folk-pop operatic genres like Huangmei Diao (黃梅調). She was enamored with the American culture and music in particular listening to Joan Baez and of course, Elvis Presley, the Carpenters and Glen Campbell. July 16, 1969, around the time the Apollo launched iconic trip to the Moon, my mom left her home in Taiwan. With not a penny to her name and her life in a suitcase, she arrived in Iowa with a determination to create something for herself in the United States of America. She moved to Los Angeles and eventually settled in San Francisco where she met my father, Robert Hsu in the shared kitchen of their apartment. My mother was a writer and a painter as well as my father, so together they formed a modest art gallery located in San Francisco’s historical Japantown. Toiling under the pressure of living life as artists and art dealers, they created art together and sold them from the art gallery. They had three wonderful sons, Warren, Robert, Jr. and Brian. Over the years, they built an empire in that same gallery selling Ukiyo-e Japanese woodblock prints. 2020 marks the 50th anniversary of now called Tokaido Arts, passed on to Robert, Jr. Through their amazing foresight and unlimited patience and knowledge, they became staples in the Japanese-American community as well as world renown specialists and the only known Chinese-American dealers in the art form. In 2020, after living with cancer for so many years, Jean fell ill. Through a deadly pandemic, nationwide revolt, protests and looting, wildfires that scorched the sky and citywide quarantines, I cared for her at our home in San Francisco during her final months. She introduced me to James Baldwin, referencing him in a conversation about why in an America she grew up to love, we have a leader that hates Chinese so much. In a quote by Baldwin, “it comes as a great shock, to discover that the flag to which you have pledged your allegiance to, along with everybody else, has not pledged allegiance to you”. I understood. However, she was so happy to have lived long enough to know that there was hope yet. Together we voted and alas, a new leader arose to dispel the great cataclysm that ailed our nation. In our little apartment, we created our bubble and shared stories, recipes, music, anecdotes and ice cream. We shed tears, gave hugs, laughed and celebrated life together amidst the daily traffic of nurse visitations and hospice care workers. This was the best time in my life. Ancestry was an important part of her life and regaled me with stories of my great grandfather who was a ‘Hanlin scholar’ (翰林編修,an honored position in the imperial court) during the Qing Dynasty and the Deputy Minister of Finance of the Republic of China from 1922 -1923. Mother described how he was the first native Chinese to attend Columbia University in America and a good friend of Sun Yat Sen. If there was time, she even wanted me to participate in a restoration of a historical building that once housed him and his family, also her place of birth. She wanted me to appreciate where we came from and to know that my brother and I do not have to be ‘great men’. We only have to be good people like my great grandfather - a good man that did good things for his people. December 6, 2020 she passed away peacefully at the age of 76. My brother and I were fortunate to have been able to hold her hand as she took her last breath. I am so thankful to you mom. So grateful to you for this honor. My mother carried herself throughout her life with a sweet naiveté that captured the hearts of many who knew her. This naiveté however placed her ahead of the curve; she was trendy, and had the most creative solutions on the most perplexing problems. Her strength in caring for her sons and my father during his passing in 2017 was a tribute to her kindness, compassion and generosity. I was fortunate to have had the opportunity to repay her for all she’s done. Her life was a great struggle but she was blessed with people that loved and cared for her throughout her amazing life. You lived free so that we may know, no bounds can hold us. You lived courageously so that we know wherever we are, we are not lost. You lived frugally so that we may live fruitfully. Is that not the great role of family? To ensure the health and safety of our community, we are following all guidelines set by local, state and CDC officials. If you are planning on attending a service, please contact the funeral home in advance, so that we can plan accordingly.

Jean Hsiang-Hsu (1944 &#8211; 2020) Age 76 San Francisco For my mother, Jean Hsiang-Hsu, life as an immigrant and American citizen wasn&#8217;t just a story of success, it was a story of struggle and survival. However, the legacy that... View Obituary & Service Information

The family of Nien-Tzu Hsiang-Hsu created this Life Tributes page to make it easy to share your memories.

Send flowers to the Hsiang-Hsu family.