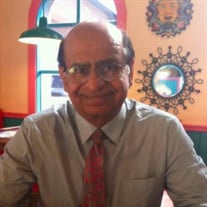 Muhammad Zahid Hafeez, 67, beloved father and husband, passed away on Friday, December 3, 2021. Zahid was born on July 15th, 1954 to the parents of Mohammad Abdul Hafeez and Aziz Begum in Lahore Pakistan. His memory lives on through his wife, Sitara Zahid and his four children: Mustafa Hafeez, Saba Hafeez, Faisal Hafeez, and Huma Hafeez. Zahid lived a full and beautiful life. After completing his Doctor of Veterinary at the University of Agriculture in Lahore, Pakistan in 1974, he served in the Pakistani Army before coming to the United States to further his studies at Boston University School of Public Health. There in Boston, he received his Master of Healthcare Administration in 1986 from Framingham State College. While finishing his Masters degree, he was approved for citizenship in the United States in 1985. In 1987, while working as a lab technician for Winthrop Hospital, Zahid was commissioned as a U.S. Navy officer. He was commissioned as a lieutenant junior grade with a speciality in Hospital Administration in the Medical Service Corps. In 1990, Zahid married Sabohi Inam and soon after, had four children. In 2001, Zahid started working at the USDA Department of Agriculture as a Lead Supervisor in Sioux City, Iowa and then transferred to Amarillo, Texas in 2009 where he remarried to Sitara Zahid Hafeez. His loved ones will always remember his strength, energy and faith. Despite the hardships he faced - he always had a smile on his face and was a light in the lives of his loved ones. He was driven by his love for his children and his mission was to give his children the best life he could. He accomplished this goal. He left knowing his kids were stable in their careers and saw his oldest two children become engaged to partners he adored. He truly lived a full life and enjoyed simple pleasures such as dinner with family, wearing his favorite baseball caps and taking naps in the sun. His faith was inspiring and helped us contend with his departure. We are thankful for all of the memories he left with us and all of his wisdom he shared with us. Inna Lillahi wa inna ilayhi raji'un. Indeed, to Allah we belong and to Allah we shall return.

Muhammad Zahid Hafeez, 67, beloved father and husband, passed away on Friday, December 3, 2021. Zahid was born on July 15th, 1954 to the parents of Mohammad Abdul Hafeez and Aziz Begum in Lahore Pakistan. His memory lives on through his wife,... View Obituary & Service Information

The family of Muhammad Zahid Hafeez created this Life Tributes page to make it easy to share your memories.

Send flowers to the Hafeez family.