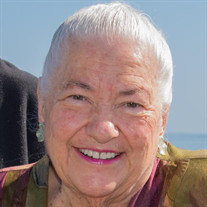 It is with great sadness that we announce the passing of Miriam Kowalczk Nielson on April 12, 2022, in Foster City, California. Miriam Doris Kowalczk Nielson (formerly of Kettering, Ohio) passed away on April 12, 2022, in Foster City, California, at the age of 90. Mimi was born on September 19, 1931, in Nazareth, Pennsylvania to Jakym and Anna (Kirchmeir) Kowalczk. She graduated from Nazareth High School in 1949 and earned her Bachelor of Science degree from Penn State in 1953. She subsequently worked as a dietetic intern at Indiana University in Bloomington Indiana as well as the IU Medical Center and Ayres Department Store in Indianapolis. Mimi volunteered throughout her life including serving as a Sunday School Teacher for nearly 40 years, Kettering Fairmont West Band President, and Kettering School District PTA President. She consistently focused on children, and served many years as School Room Mother, Cub Scout Den Mother, Brownies Leader, and Girl Scout Den Mother. Mimi was preceded in death by her husband Kenneth E. Nielson in 2018. They were married for 63 years and together raised a family of four children. The amount of time and energy she put into her children’s education, sports, activities and hobbies was endless. It was not uncommon to see her up at 5am to help deliver a paper route, or stay up all night to help one of her children finish a school project, or drive long distances to ensure her children could compete in higher-level sports competitions and performances. Mimi and Ken later traveled throughout the country, spending time with family in Ohio, Florida, Arizona, Pennsylvania and California, along with a great anniversary cruise in Hawaii. Her personal interests included admiring wildlife, enjoying the ocean and beach, watching classic movies/musicals, hunting for antiques, drawing, painting, sewing, crafts, puzzles, playing cards and board games. Mimi is survived by her children Mark (Susan), Brad (JoAnn), Dean and Gwen Waring (Phil), and her grandchildren Kevin and Lindsey Nielson, as well as her many nieces and nephew. Mimi is remembered for her tenacity and devotion to her family, as a loving wife, mother and grandma who always put her children first. A private family service will be held on April 25, 2022.

The family of Miriam K. Nielson created this Life Tributes page to make it easy to share your memories.

It is with great sadness that we announce the passing of Miriam...

Send flowers to the Nielson family.