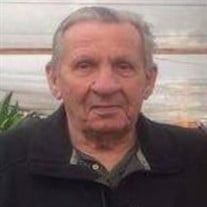 Manfred Ohm was born in Berlin, Germany as the only child to Carl and Agnes Ohm (Liesk). Manfred is preceded in death by his father, Carl, who died in 1986, his mother, Agnes, who passed in 2007, and his wife of 41 years Elsie Ohm (Pacheco), who died in 2013. Manfred had no children. Manfred attended school in Berlin and was confirmed a Protestant in March 1943. His Father Carl Ohm was a bookkeeper, and both parents owned a bookshop in Berlin, where Manfred served his apprenticeship as a bookseller. On April 4, 1955, Manfred, his parents, and his wife Brunhilda immigrated to the United States, where they settled in New York. There he held various jobs, including Building Maintenance Supervisor, before the four of them moved to Redwood City. He and Brunhilda divorced in 1970. Manfred worked in the San Francisco Bay Area, beginning with Raytheon Semiconductor and then on to Stanford University. Ultimately, he retired in 1975 as a Chief Building Engineer with Goldson One in San Jose at the age of 65. Manfred met Elsie Pacheco when she worked in the Del Monte Cannery in Redwood City in 1971. They were married in 1972, and their marriage lasted 41 years. Manfred and his parents purchased a Redwood City duplex in 1974. His parents lived in the upstairs unit while Manfred and Elsie lived downstairs in the central unit. Manfred loved people, animals, his neighbors, and going to Redeemer Lutheran Church with his mother in Redwood City. He was an avid World Stamps Collector, and he loved gardening. He also had a passion for computing. He taught basic computing for 2 Semesters with his longtime friend, Dave, as his assistant in the computer lab at College Of San Mateo. He then went on to teach Linux Computing at the Senior Center in Redwood City. After his father, Carl, died in 1986, Manfred cared for his mother, Agnes, until she passed away in 2007 at the age of 102. Manfred is survived by three great cousins, Werner Fischer, Eberhard Fischer, and Wolfgang Fischer. He also has a cousin Marjanne (Hinze) Graf and several nieces and nephews who all live in Germany. In 2018, Manfred moved into the San Carlos Elms Memory Care Unit for full-time care. Manfred’s duplex sold in 2019. Services for close family will be held at Skylawn Memorial Park in San Mateo, CA, in late May. Skylawn is also offering an online service for those who cannot attend due to Covid-19. In lieu of flowers, donations may be made to The Alzheimer’s Foundation or Redeemer Lutheran Church in Manfred’s Honor. To ensure the health and safety of our community, we are following all guidelines set by local, state and CDC officials. If you are planning on attending a service, please contact the funeral home in advance, so that we can plan accordingly.

Manfred Ohm was born in Berlin, Germany as the only child to Carl and Agnes Ohm (Liesk). Manfred is preceded in death by his father, Carl, who died in 1986, his mother, Agnes, who passed in 2007, and his wife of 41 years Elsie Ohm (Pacheco),... View Obituary & Service Information

The family of Manfred Ohm created this Life Tributes page to make it easy to share your memories.

Manfred Ohm was born in Berlin, Germany as the only child to...

Send flowers to the Ohm family.