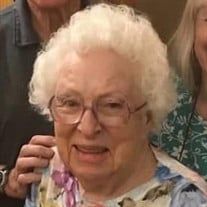 Luella Frances Dilling, passed away peacefully on September 28, 2020 at her home in San Mateo, CA. She was 97 - (43 days short of turning 98). Luella was born in Gary, SD to Raymond L Thompson and Olive (Peden) Thompson on Nov. 10, 1922. She was raised in Brookings and Gary, SD. She moved to San Francisco, CA during WWII to wait for Peter William Hegre to get back from the war. They married and stayed in San Francisco. They had 3 children, Peter William “Gary”, Larry Earl and Judy Rae. After 10 years they divorced. Luella was very involved in the American Legion Auxiliary. She held many of the offices in the San Francisco Unit including President of the Unit. She was also involved in Golden Gate Salon #29 - 8 & 40, American Legion Auxiliary; where she also moved up the ranks. Luella, started the Jr. American Legion Auxiliary Drill Team of San Francisco. They marched in San Francisco’s parades and many throughout the CA. When family and/or friends would come visit her in San Francisco they were always amazed that she walked the hills of SF in 3” heels. She also married Thomas D. O’Brien and after about 10 years they got a divorce. In 1976 she married Richard A Dilling. They bought a home in San Mateo and moved there over 40 years ago. Luella joined the San Mateo American Legion Auxiliary Unit 82 and again became very involved also becoming Unit 82’s President. Luella, visited the Veterans every week at Menlo Park Veterans Administration or Palo Alto Veterans Administration. She made a special stop each week to visit the dogs at the Warrior Canine Connection to give the pups special treats and encouraging words. She did that for over 25 years. When Luella was 92 1/2 years old she had a stroke. She continued to visits the vets for another 2 1/2 years. She had a few more small strokes over the next 5 1/2years. Luella was also very involved at St. Francis Methodist Church in San Francisco and Burlingame United Methodist Church when she moved to San Mateo. She was in the choir of both churches, Bell Choir in Burlingame and the treasurer of both churches. Luella, worked at the San Francisco Mint when she first moved to San Francisco. She also worked at Tay Hobrook as the switchboard operator and when they closed down she worked at Kraft Foods as the switchboard operator and then in the credit department. After retirement, she stayed busy with her 8 grandchildren, church, American Legion Auxiliary and her knitting! She made to many to count baby blankets, sweaters, booties and other clothes for kids. She also made many sweaters and skirts for herself, friends and family. Luella loved her SF Sport Teams! Roller Derby, 49ers, Warriors and SF Giants! Even in the last 5 years she watched as many of the Warriors & SF Giants games as possible. Luella loved traveling with Richard. Richard and Luella loved to Square Dance, including this while traveling. Luella also loved going to her exercise classes 5-6 days a week.Even after her stroke she continued walking 3/4 of a mile everyday. Luella also loved going to her family reunions every 2 years all over the US. Luella, out lived her younger sister, Joyce and brother, Royal, but was so happy to have many cousins and their families to visit. Luella had 8 grandchildren, 10 great grandchildren and3 great great grandchildren. She also had many nieces and nephews and great nieces and great nephews and always remembered ALL their birthdays until her 1st stroke slowed her memory down. Luella’s family will be celebrating her life on her birthday next year! The family would also like to Thank Lini M. for being such a wonderful caregiver to our mom for over the last 3 years. Also many thanks to L. Bruce Mebine, OD and Staff, Thomas Watters, MD and Staff, Daniel Clevenger, D.D.S. and Staff and Darcy Benson, AU.D. and staff for all the Wonderful Care they have given our mom over the years. Memorial gifts can be made to Guide Dogs for the Blind and/or anyU.S. Veteran group of your choosing.

The family of Luella Dilling created this Life Tributes page to make it easy to share your memories.

Send flowers to the Dilling family.