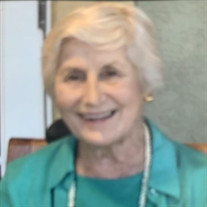 Louise passed peacefully just a few weeks shy of her 98th birthday. She was born in Boston on August 11, 1923, to Berthe and Edward Palmer. Berthe, at age 36, thought she had a prolonged bout of indigestion, and Edward, in his mid-fifties, had no longer considered fatherhood, but both were thrilled to find out they would soon be first-time parents. Edward retired when Louise was five, and the family moved to the south of France. Louise, a prolific storyteller, loved to share her childhood memories of her carefree life in Ste Maxime. As she grew older, her parents became increasingly displeased that her English was peppered with French inflections, so they sent her to boarding school in England for several years. In her young teens, Louise returned home at Christmas with chilblains, ending her British education. Instead, she attended high school in Paris. She loved the city, but it wasn’t long before the family could no longer ignore the threat of German invasion and war, and they returned to Ste. Maxime. A short time later, the US government warned all Americans to leave France immediately. Their safety could not be guaranteed. Louise and her parents heeded the alarm. Somehow, within 24 hours, Edward secured a Citroen and fuel on the black market. Louise, heartbroken that she was supposed to leave her beloved dog, Kiki behind, defied her parents and smuggled him into a compartment under the back seat while they were busy packing and making arrangements with neighbors. By the time Kiki made his presence known, the escapees were well on their way, zigzagging through France, dodging Nazis. They continued on their perilous journey until they met the train that took them across the border to Spain, then Portugal, and at last, aboard the ship that crossed the Atlantic and arrived safely in New York Harbor. Once back home in Boston, Louise graduated from Brimmer and May School and attended Garland Junior College. It was there, she met her future husband, David, who crashed a school dance. Over the years the couple moved from Boston to upstate New York to southern California, finally settling on the San Francisco Peninsula. Louise had four children before she and David separated and later divorced in the 1970s. During her marriage, she and David raised generations of Great Pyrenees dogs and collected many trophies and ribbons at dog shows over the years. After the divorce, Louise took a job at the San Mateo Public Library, but remained very active, holding offices, and raising money for arts organizations including Peninsula Symphony, Broadway by the Bay and Hillbarn Theatre. Another passion was singing, and she enjoyed performing with the Peninsula Choraliers. She continued her arts fundraising well into her 80s, but once her last child migrated to the North Bay, she followed, first living in Novato and spending her final years in San Rafael. She is survived by her daughter Christine, her husband Steve, son Ezra, his wife Megan, daughter Anne, her husband Scott, granddaughter Tessa, her husband Stuart, grandson Jonny and great-grandson, Rylan. Her youngest daughter, Faith, predeceased her. She will rest close to Faith, on a grassy knoll, overlooking the Pacific Ocean. Her stories will live on.

Louise passed peacefully just a few weeks shy of her 98th birthday. She was born in Boston on August 11, 1923, to Berthe and Edward Palmer. Berthe, at age 36, thought she had a prolonged bout of indigestion, and Edward, in his mid-fifties, had... View Obituary & Service Information

The family of Louise Palmer-Persen created this Life Tributes page to make it easy to share your memories.

Send flowers to the Palmer-Persen family.