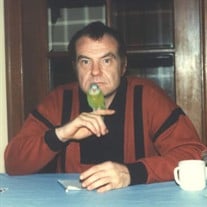 Louis Henry Miller III was born on May 9, 1940, in San Francisco, California, his father, Louis Henry Miller Jr. and his mother, Evelyn (ne’e) Landolt, were 26 and 24 respectively at the time. Affectionately known as “Lou” to all his family and friends, died November 18, 2021 after a year long battle with prostate cancer. Lou graduated from Lincoln High School the Fall of 1957 before enlisting in the US Navy on November 26, 1958. He was honorably discharged from the US Navy on November 2, 1960. Lou married the love of his life Jacqueline Lee Yaeger at the Swedenborgian church in San Francisco on June 17, 1967, they were 27 and 22 years old respectively. Lou was a journeyman electrician -- a proud member of IBEW, Local 6. He was a member of the San Francisco Native Sons of the Golden West, dedicated to the preservation of California historic places and structures. In his free time, Lou was an avid San Francisco Giants fan and season ticket holder; he would frequently travel to their Spring training whenever possible. Lou is survived by his wife of 54 years Jacqueline, his three daughters, Laura and her husband Michael Tust, Leeanne and her husband John Hayes, Lynn Miller and her pit bull /mastiff Papa, this is in addition to his younger brother Bruce Miller and his wife Sandi, as well as their two sons, Jesse and Jeremy. We will miss seeing him in person and talking to him about movies, sports or catch him dancing while listening to his favorite records. May you have Fair Winds and Following Seas as He lives on with us in spirit. A memorial and funeral service is scheduled for November 29 at 10 am at the Skylawn Funeral Home and Memorial Park in San Mateo. Come share your memories.

The family of Louis H. Miller created this Life Tributes page to make it easy to share your memories.

Send flowers to the Miller family.