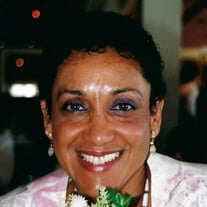 LINDA HENDERSON BOSLEY was born in New Orleans, Louisiana on June 14, 1949 to the late Lenneal L. Henderson, Sr. and Marcelle Heno Henderson. She was one of four of the Henderson children born in New Orleans, preceded by Lenneal Joseph and Carolyn Marie and followed by Calvin Gerard. In May of 1952, Linda and the family moved to San Francisco, California. There, three more Henderson children were born….Keith Patrick, Savon Lourdes and Mark Jude. On March 8, 1962, Linda received the Holy Sacrament of Confirmation at St. Michael’s Church In San Francisco. Later in life, Linda joined the Church of Scientology and became a Minister of the Church A gifted mind and soul, Linda would excel in her education at several Catholic schools in San Francisco, graduating near the top of her class from high school. She received a Bachelor of Nursing degree from San Francisco State University and, upon graduation, followed her mother into the nursing profession. She rendered exceptional service to the city/county of San Francisco for nearly thirty (30) years as a public health nurse and ten (10) years as a public health nurse for the city/county of Los Angeles. Linda was rather shy early in life but later became quite the extrovert. She had many hobbies but her favorite was spending time with the family. She loved to orchestrate and cook for family gathering anytime, not just traditional holidays. Traveling ranked as Linda’s secondary hobby. She enjoyed cruising to places like Alaska and the Caribbean and after retirement, set her sights on overseas travel managing to visit China but plans to visit Africa were precluded by health challenges. Linda did a great deal of domestic travel with her cousin Elaine that she affectionately called her “road dog”. Linda was an excellent photographer and took many of the cherished family photographs. She also enjoyed watching and filming butterflies and cats like Tuxedo and Blue Eyes were among her favorite pets. Despite a busy work and social life, Linda spent numerous hours promoting and supporting community endeavors. In San Francisco, she focused on education improvements and human rights; in Los Angeles the focus was health awareness, particularly SIDS (Sudden Infant health Syndrome). She was married to the late Richard Thomas and, prior to marriage to Richard, she was married to Larry Bosley. She was predeceased by her beloved brother Keith (1979); father Lenneal, Sr. (2004) and mother Marcelle (2016). She leaves to mourn her sisters Savon Henderson (Joseph Bartholomew) and Carolyn Marie Henderson (aka: Yemaya Enderson); her brothers Lenneal Joseph Henderson, Jr. (Joyce), Calvin Gerard Henderson (Tina) and Mark Jude Henderson (Melanie); her aunts Dorothy Evans (Leroy), Doris Martin, Barbara Heno Henderson, Beverly Johnson, Elaine Block and Lillian Henderson; her uncle Lee Henry Henderson; her nieces Janeefa Davis, Angelique Gaston (Keenan), Markia Henderson, Daniello Castro, Yesenia Castro, Abbygail Verdan and Anneliese Verdan; her nephews Calvin La Shan Henderson, Lenneal Thorpe, Lenneal J Henderson III (April), Mark Jude Henderson, Jr and Matthew Henderson; her grandnieces Ariana Davis, Ashanti Gaston and Layla Castro; her grandnephews Dalvin Henderson, Ruben Castro and Julian Castro as well as a host of cousins, friends and colleagues. She will be missed by all In lieu of flowers, please consider contributing to the "Lenneal J. Henderson Scholarship Fund." To do so: Make your check payable to the University of Baltimore Foundation, and in the memo section of check write-in "Lenneal J. Henderson Scholarship Fund in memory of Linda Bosley". Mail Check to: University of Baltimore, Office of Annual Giving and Special Gifts, 1130 North Charles Street, Baltimore, MD 21201.

The family of Linda Bosley created this Life Tributes page to make it easy to share your memories.

LINDA HENDERSON BOSLEY was born in New Orleans, Louisiana on...

Send flowers to the Bosley family.